A Fun-Day at the Bay of Fundy: Hopewell Rocks!

A Fun-Day at the Bay of Fundy: Hopewell Rocks!

It was 14:30 before Tasia, Not Larry, and I got out of the house to seize the Bay of Fundy for the day.

Okay, so we were not really going to seize it.

But we were going to have a quite a Fun-Day at the Bay of Fundy!

It took about an hour to drive to the Hopewell Rocks from Sackville, New Brunswick. I actually had no idea what we were in for as Tasia was our host, guide, driver, and friend…she wore a lot of hats for the day. 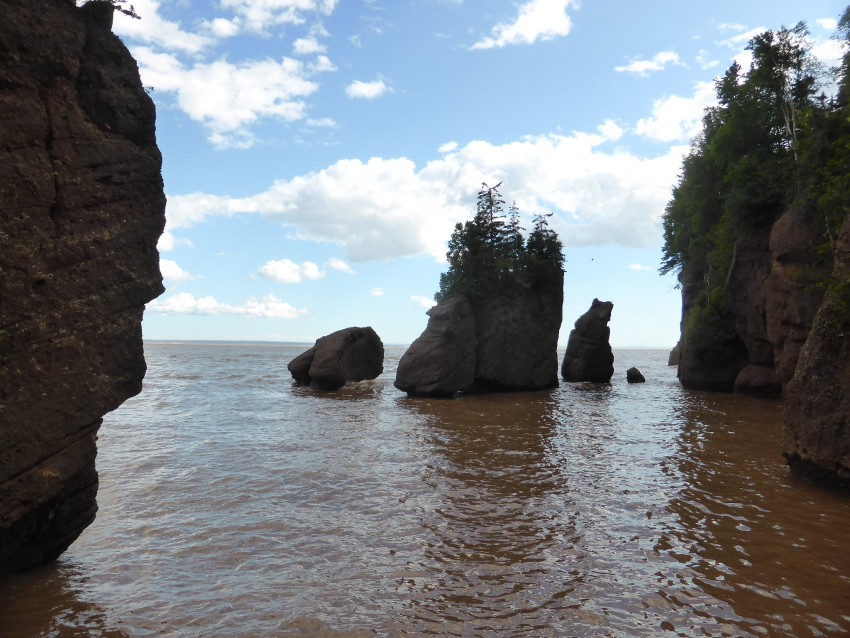 High tide at the Hopewell Rocks in the Bay of Fundy.

It was New Brunswick Family Day when we arrived at the Hopewell Rocks which was consequently the busiest day of the year. A pipled teenager was at the window I approaced to pay for the three of us at $10/person to get in through the gates. He said, “That will be $30.” It was at 16:00 when we arrived. He then asked me where I am from for statistics. I told him, “Saskatchewan.” Pimples entered my home province into the system and then the moment before he went to swipe my Visa he said, “Oh…wait. It is free today because it is Family Day.” Today is the busiest day of the year and there were 1000’s of people at the Hopewell Rocks, and this guy totally forgot half-way through the day that it is free to get in today?

Pimples must have been distracted with fantasies of last night’s gaming still playing out in his head. So, we walked through the gates and hiked down to the Hopewell Rocks at the Bay of Fundy, where the tide changes so much.

Here are some fun tidbits of information from the signs at the Bay of Fundy:

Fascinating! Since we were there at high tide and wanted to see low tide, we left the Bay of Fundy for some hours to visit a sea town called Alma where we spent the rest of the afternoon and early evening drinking beer in addition to eating sticky buns and pickled eggs before we tackled a lobster feast. New Brunswick is awesome for the fact that we have had moderately priced back to back lobster meals for dinner since we arrived.

A person could get used to this. 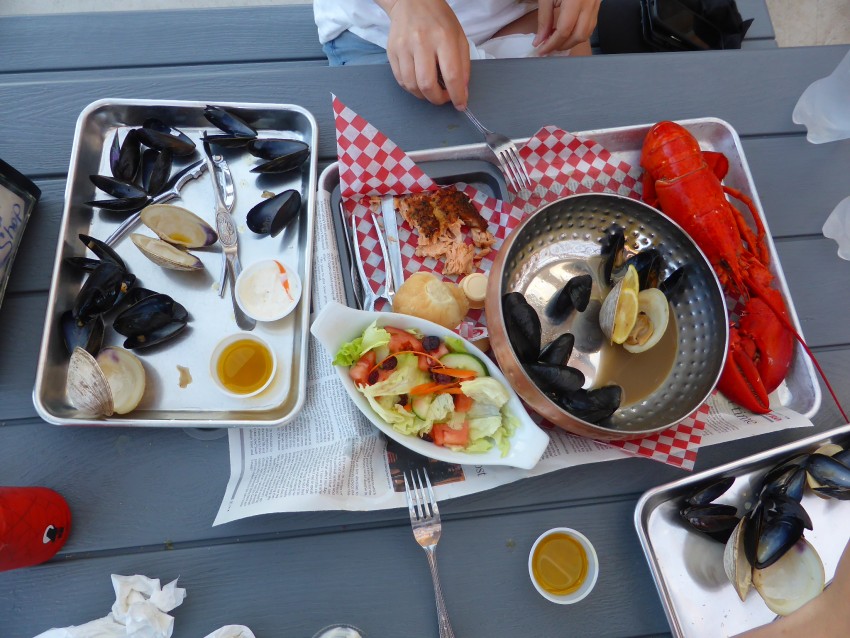 The town of Alma is so great that it makes me want to live there for a summer. There are barn-houses in frequency and the vibe of the place is just so hip. Lobster restaurants line the streets and there is a craft brewery in town. I was so happy the whole time we were there having so much fun just hanging out in the town. When we I was not visiting with Tasia and Not Larry, I was imagining Not Larry and I living in a barn house in Alma where I would write books from an upstairs window, looking out on the ocean, before we took afternoon visits to the brewery to see what we newly on tap for the day and then we would have a cheap lobster meal to finish off the day. What a summer! What a plan… 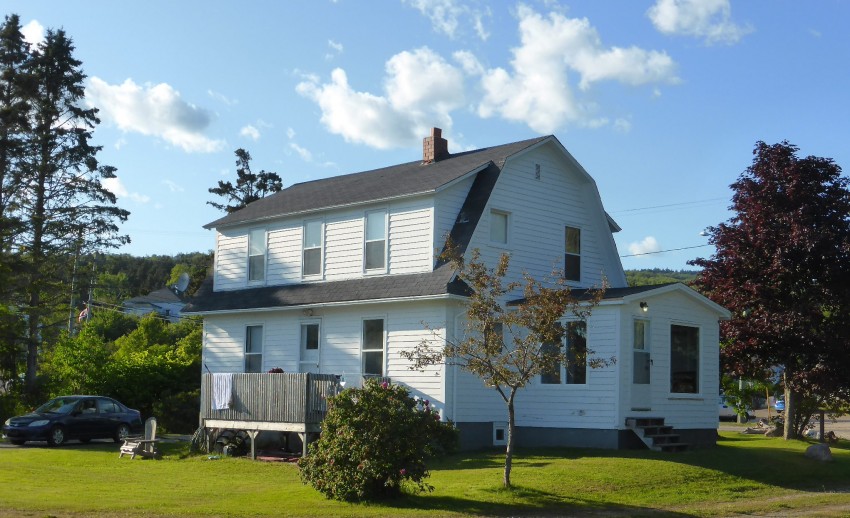 I own zero barn houses, but I could use a handful of them!

Tasia, Not Larry and I headed back to Hopewell Rocks at the Bay of Fundy to catch the tide as it was far out. The Hopewell Rocks ‘close’ at 20:00 but you can park outside of the gate, walk in, and head back down the path ‘At Your Own Risk’. We decided to take the chance as the tide was an hour from its lowest point at 21:10 when we arrived at the bottom of the ocean floor in the Bay of Fundy. It is difficult to imagine that in just another few hours the sea floor we were standing on will be 46’ above our feet again. It was just so great to walk around. Hopewell totally Rocks! 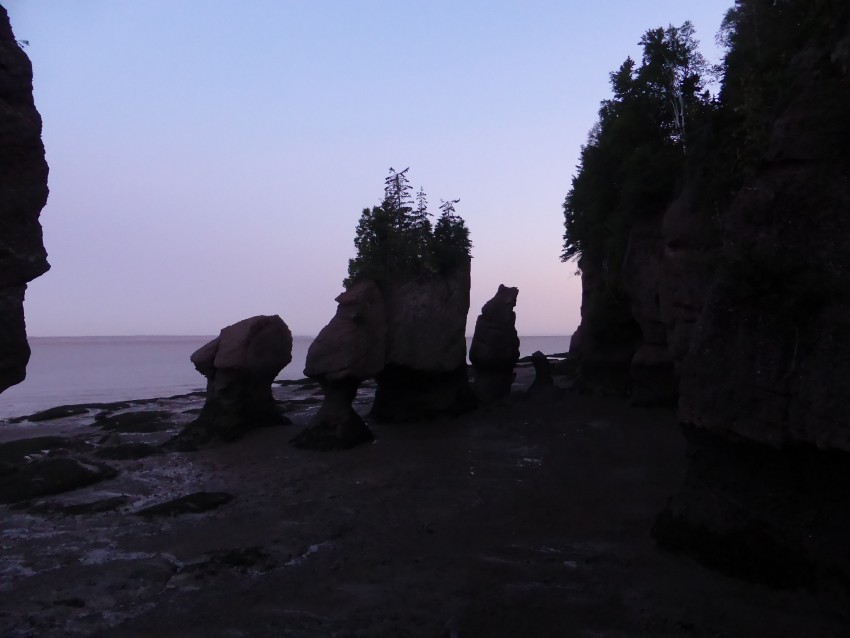 From the same spot for comparison with the top photo: low tide at the Hopewell Rocks in the Bay of Fundy.

I am not sure where the mosquitoes come from, but they also seem to like to hang out around the Bay of Fundy ocean floor in the evening with the tourists. Legs must make for a tasty pre-bedtime snack.

On the drive back to Sackville, we stopped to see the fireworks in Hillsborough. With a bit of luck, arrived just in time to get an ice-cream and the fireworks started the moment the lady put the cone in my hand. Perfect. It seems that fireworks have improved in the past few years since I stopped paying attention to them. They are starting to do new tricks in the air that I have never witnessed before and all three of us were amazed at the spectacle.

Heading back to Sackville for the evening, we discovered that there is a lot of Acadian country music on the radio. I had no idea such a thing existed but there are several stations of the genre. That got us thinking about how with such a small market, that it might not be difficult to become a superstar in Acadian country music. Maybe I could even do it! But, I would have to learn the language. Then Tasia, Not Larry, and I started hatching a plan where I could become the best spoon-playing-and-whistling session musician in all of New Brunswick. It would probably be pretty easy to do with about a year os solid dedication! Think of the fame and the glory! Tasia came up with my stage-name by Francophoning my first name and then changing my family name to Spoon. Stephane Spoon! Perfect.

We are for sure going to need that barn-house in Alma if I am going to get an Acadian spoon-playing/whistling superstar session musician career off the ground.

“Today at work, we had a good chat about life and how the world turns. He then told me, “In five years of working out here, I have never had this in-depth of a conversation. Conversations out here are always about tits, trucks, booze and drugs.” Awesome.”
— Fort McMurray, Alberta
[View All]