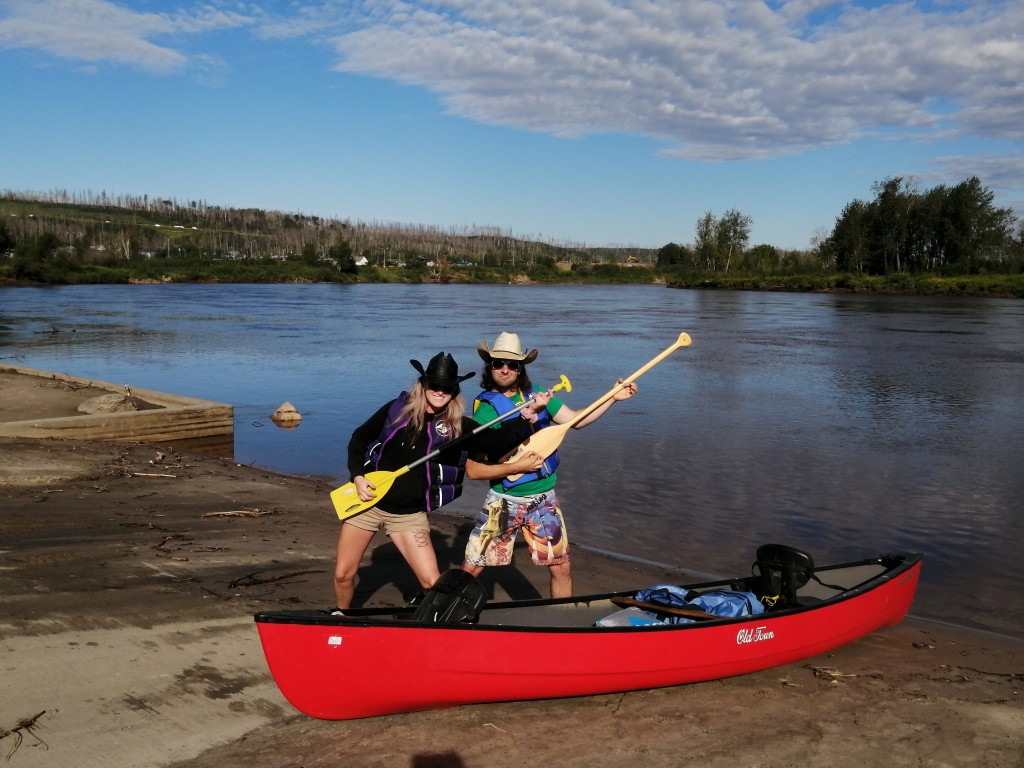 Not Larry and I got up at 06:30. We would have been out of the house by 08:00 as planned, except I cooked breakfast. That can never go well. Breakfast was boiled eggs and I did not boil them long enough. So, Not Larry decided to microwave the eggs a little to finish them off. She punctured them, but not through to the yoke. We found that out because when she was checking them after microwaves passed through them for a spell, one of the eggs blew up. I mean, freaking blew up! It actually blew up in her face.

There was egg that hit her in the eye, egg on her nose, egg in her hair, egg all the way to the fridge 2 meters away, egg on the counter, and of course, there was egg all over the inside of the microwave.

Those things are little bombs! It was pretty concerning that it hit her in the eye, though she would be alright. It was a shame that it got her in the eye because otherwise, the egg grenade scene would have been hilarious. But it scared me. A person could actually lose an eye to a microwaved eye. I had previously believed that eggs were only dangerous on Halloween.

At 09:08 when Not Larry’s Sister dropped us off where Not Larry and I unloaded a 16’ canoe into the Clearwater River at Waterways, just south of Fort McMurray. I was the paddle in the front and Not Larry was the paddle/rudder in the back. We rode the Clearwater to the Athabasca River and headed north. It was uncharted territory for Not Larry on the river and it was all brand new to me. We had really been looking forward to the adventure. 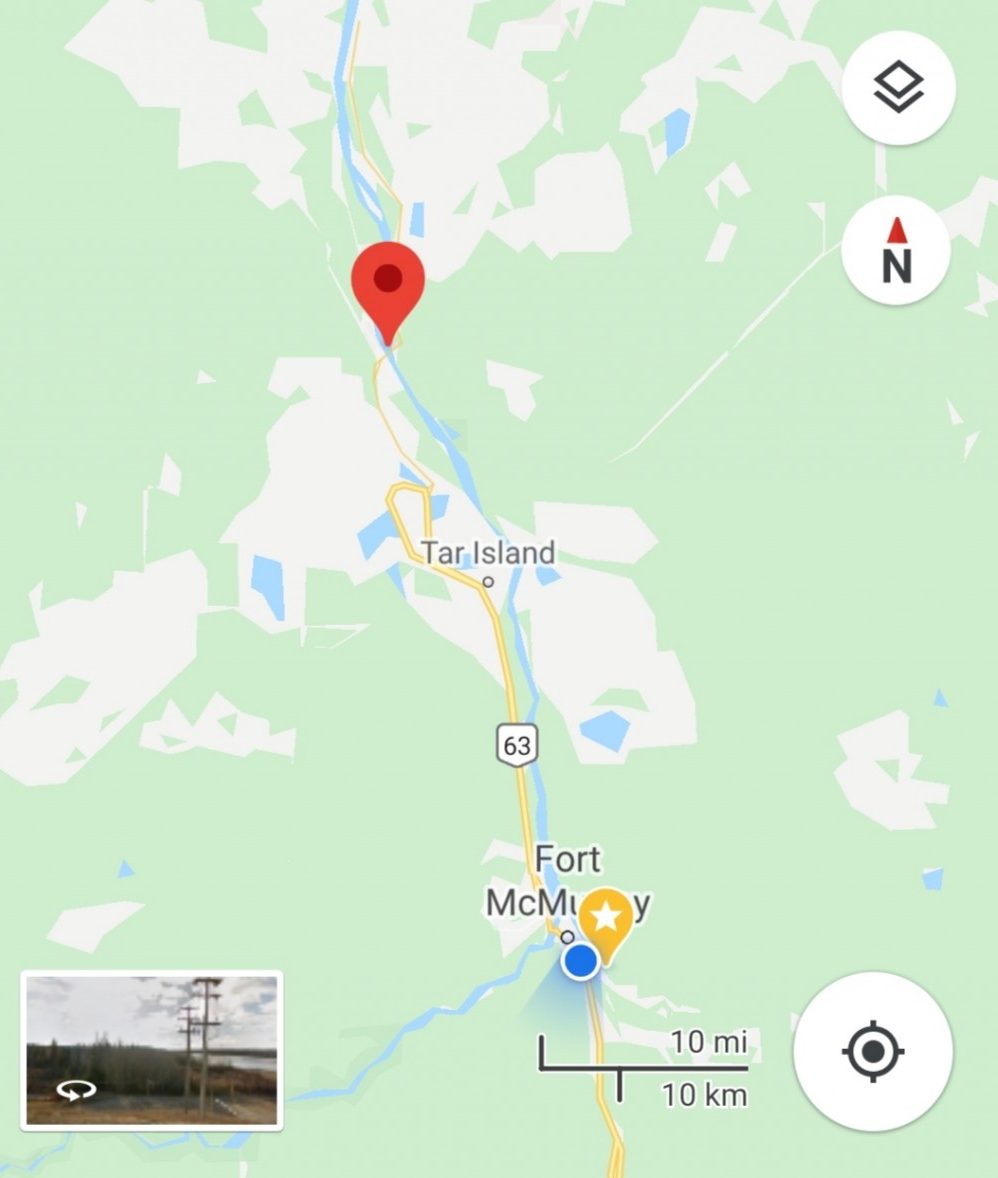 The current could carry us but we had to paddle to be able to make any kind of time as we were heading to the Bridge to Nowhere which was 50 kilometers away. We sang as we cruised along: 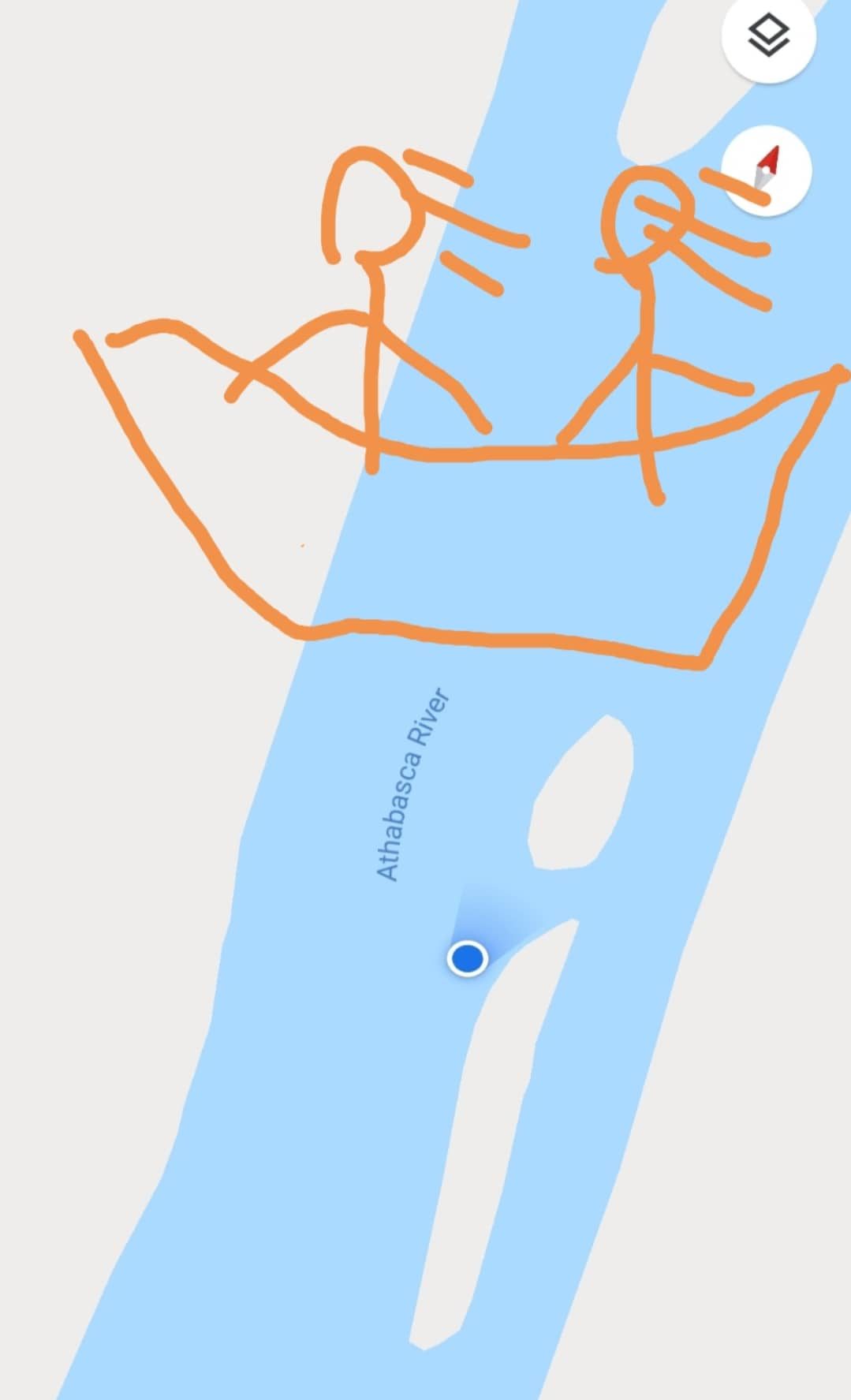 (Not an actual photo of Beaver and Not Larry)

We got to the east side of the river where we were next to small river-islands. Suddenly, and much to our surprise, we heard the cracking of bush and vegetation. Both Not Larry and I immediately raced to mental-images of a bear barrelling at us from the side. When we looked towards the crackling brush, there was just enough time to see a beaver jumping off of a bank and into the river next to us. Perhaps he was territorial and went to protect his home from me. About 10 minutes later, another beaver jumped off a bank and into the water when it saw us. We seemed to be quite a threat to my busy brethren. 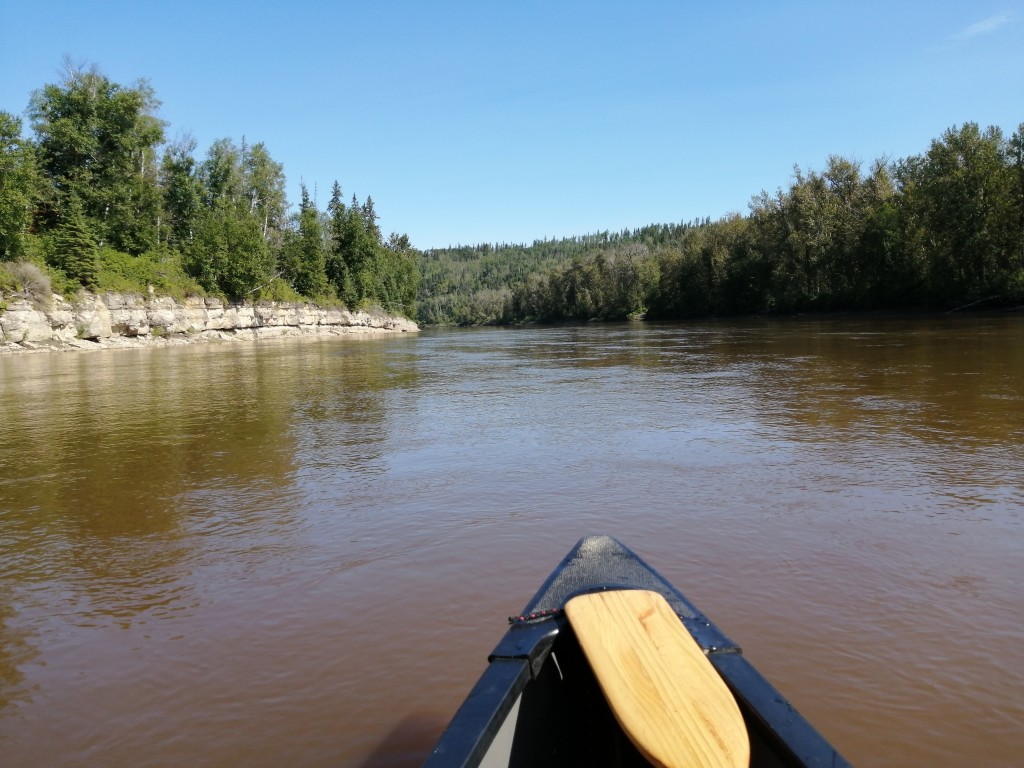 Not Larry and I cruised along, just listening to the beautiful nature. At noon we stopped on an island to have a lunch picnic. She had a pee, and I did as well but as I was shaking off I noticed a set of bear tracks in the sand only a couple of meters from where we were standing. Not Larry said, “We were hoping to have lunch, not be lunch.” We meekly headed back for the canoe and pushed off again, looking over our shoulders the entire time. It is an uncomfortable feeling to know that you are very close to a potential encounter with a bear. 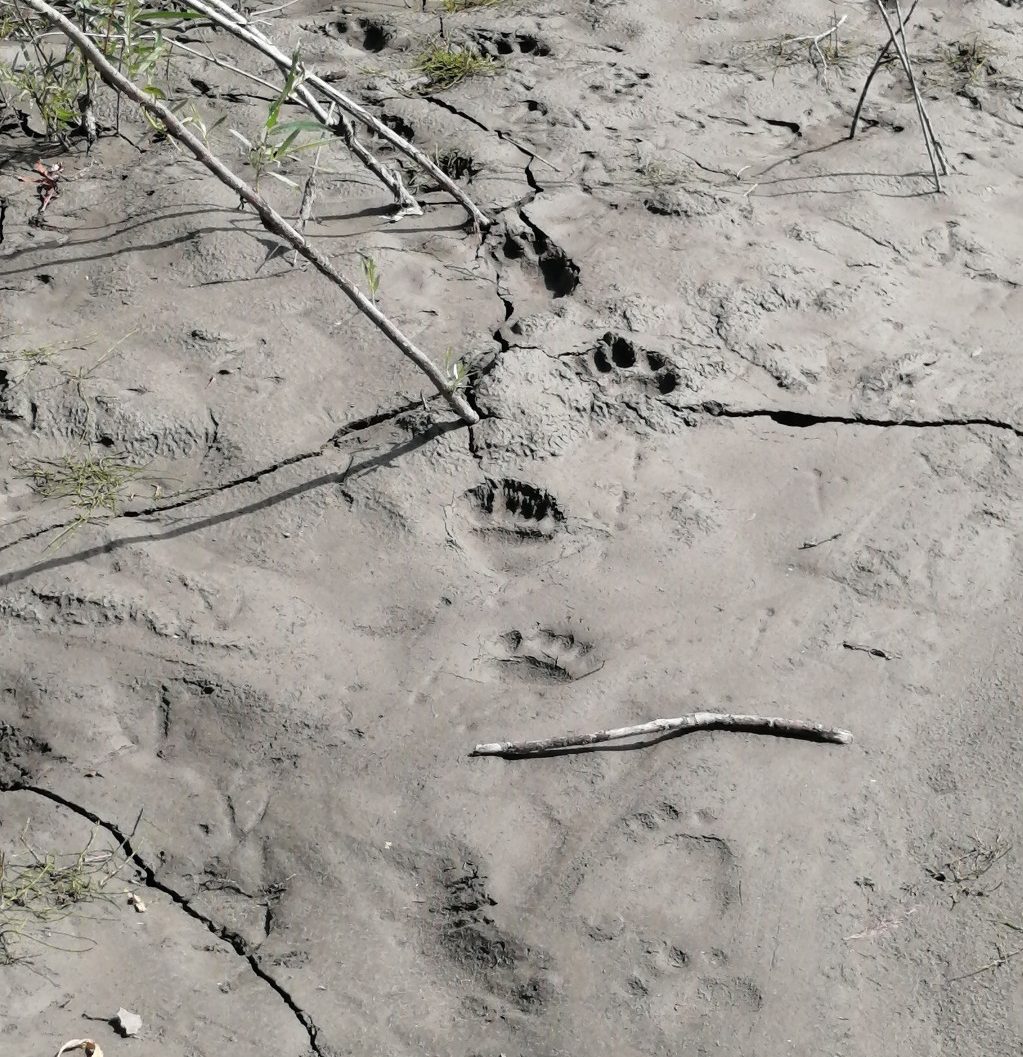 I checked my Instagram account about three hours into the trip to find a message and photo from a man in Haines, Alaska, who snapped a shot of a Beaver sticker that I had put on a hand-dryer in a bathroom when we there two years ago. That the sticker was in such great shape shows that no one uses the hand dryer. But, it was a crazy bit of irony that someone sent that particular photo to my Instagram account today because below my sticker on the air-dryer was another sticker which said, ‘Paddle Oar Die.”

The synchronicity of life: 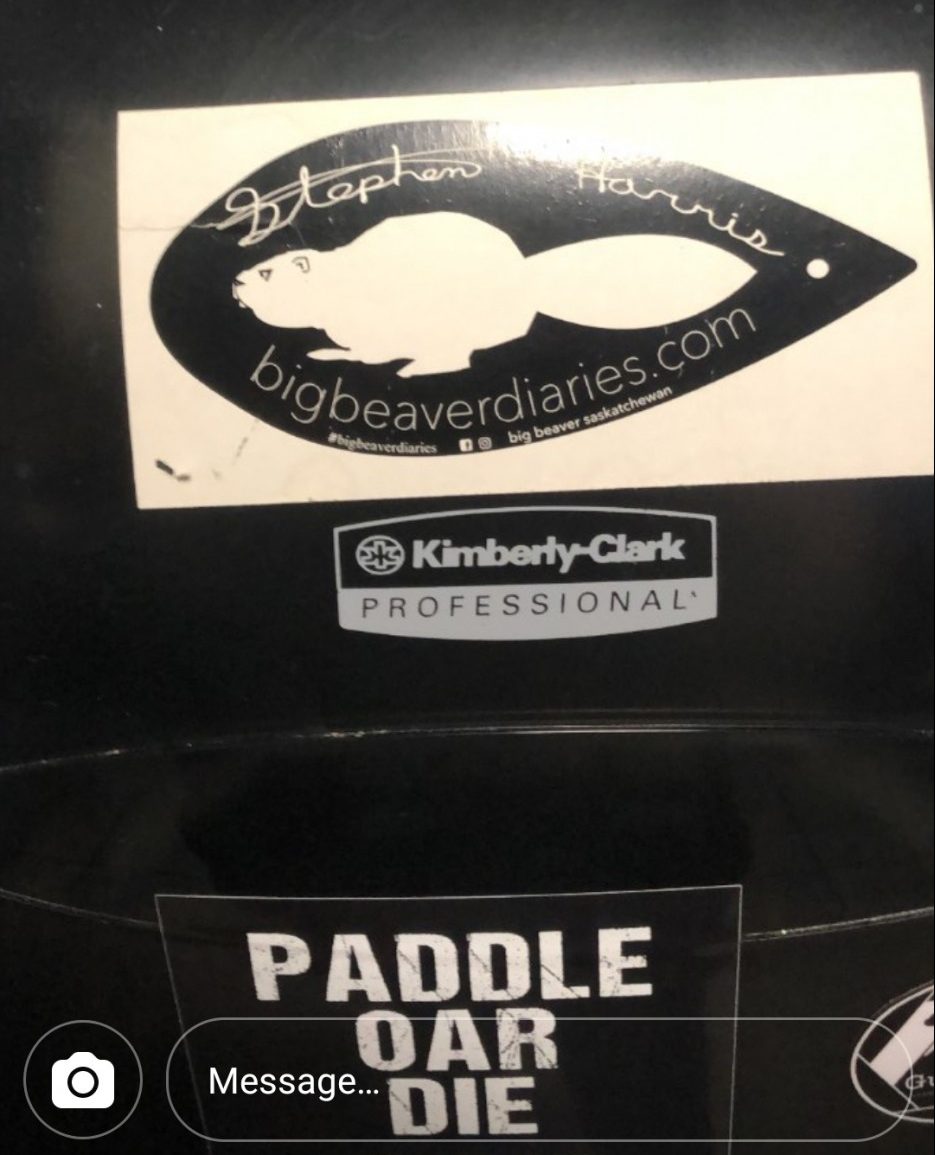 Two years and no sticker-wear means that no one bothers to dry their hands in that bar bathroom in Haines, Alaska.

At times as we headed down the river I felt like we were modern versions Huck Finn and Jim as we traveled along. And at other times it felt like we were 16th-century French explorers, coming in to get some buffalo hides, and we were looking for smoke signals from the locals to tell us that they had hides, but we were unable to read to smoke signals.

It was hard to not drift off and think about what that life must have been like then: being one of the first Europeans to come into this territory and meet the local tribes. 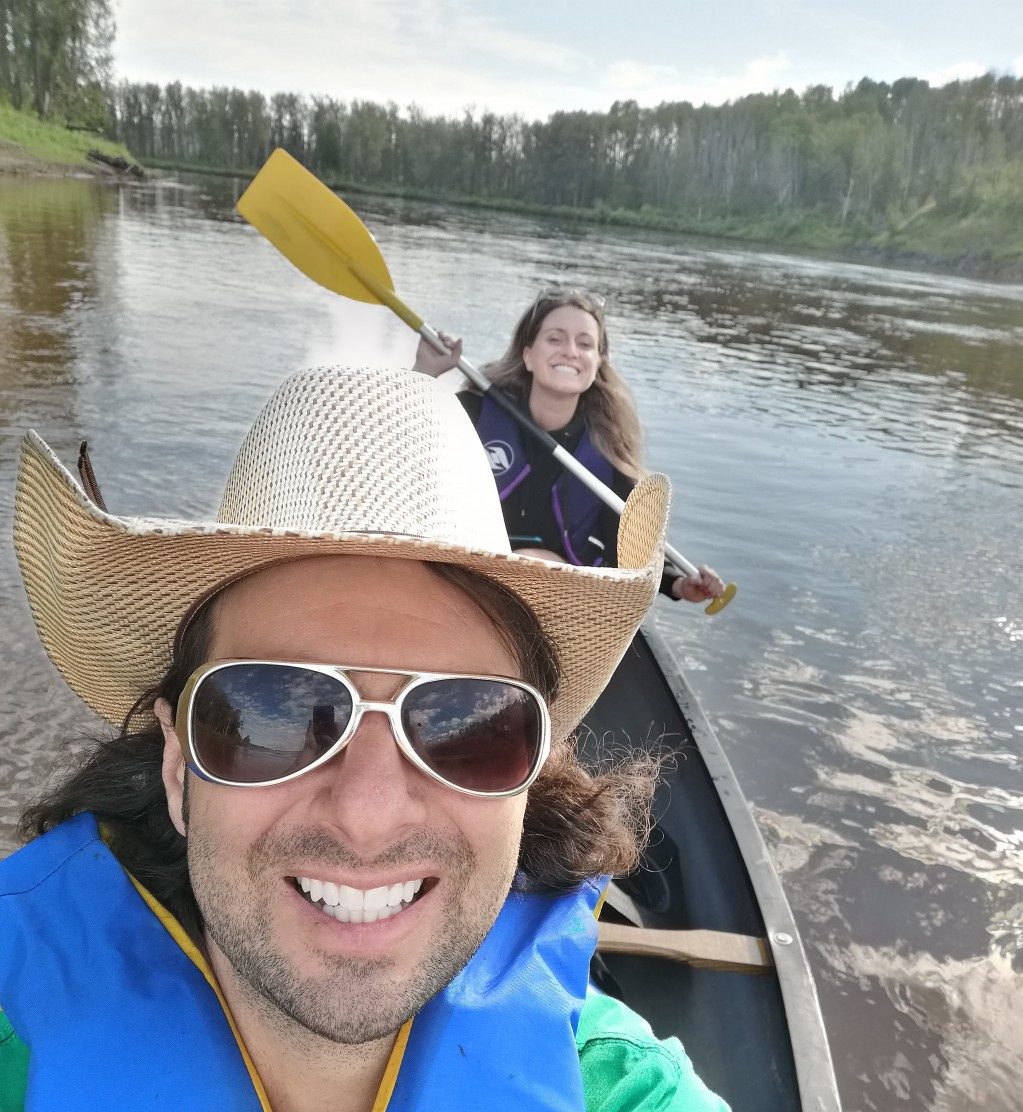 Paddling. Main engine in the front. Main rudder in the back.

Weather indications had said in the morning that it was going to be nice all day. However, the weatherman is the only person in the world who can make a mistake every day and still keep his job. It started spitting, and then the rain really started coming down, hard. There was a plethora of lightning and thunder, neither of which was making us comfortable in a 16′ canoe on the river that was starting to get rough. We had no choice but to bank our canoe and hope the storm would pass. The wind was coming from the north all day. Not Larry had packed a large umbrella in hopes that we would have a wind from the south that would allow us to anchor our umbrella to use it as a sail in order to drag us along. We had a completely different plan for the use of that umbrella but I am sure glad we had it as we were able to use it for its proper design, even if there was lightning while we hung onto the metal pole. The water was pounding down and the umbrella turned out to be our only shelter without having to flip over our canoe to lay under. There was nowhere for Not Larry and I to escape as we were on private Suncor property and we would not be able to cross the land as the mine and plant were all around us as well as between us and the highway.

When there was a break in the weather and the rain was just spits, Not Larry and I bailed out the canoe, shoved off, and paddled hard for about 30 minutes towards a huge Suncor bridge that crossed the river. As we got closer, the rain started hammering down on us again. We pulled our oars hard and got under the bridge where at least we could hide out from the storm. We were illegally docked on the land, but there was no place else for us to go, so we hid under the bridge from both the weather and Suncor security like homeless couple seeking refuge. About 45 minutes into our stay, imagine the surprise of a couple of workers in blue coveralls and hard hats who had to come under the bridge for some maintenance to find us sitting there. We said hello. They helloed back with a bit of shock. Once they left we were certain that they would call security on us, which was something we did not care about as security would have kicked us off-site and that would have meant an escort/ride directly to the highway. However, no one ratted us out. Of all times for humanity to actually be cool about something…

After about 90 minutes, the storm let up. By that time Not Larry and I were drinking beer on-site, and I had an under-the-bridge emergency-poop. I would have loved to have had a report on us: “A couple, possibly homeless, arriving by canoe, hiding out under the Suncor bridge where they were drinking alcohol and defecating.” I would have been happy to have had my face beside a fantastic headline like that!

We pushed off and had not gone more than 20 minutes down the river when the storm came for us again. We banked once more, hiding under the umbrella which was not nearly as good of a shelter as the bridge had been. Unfortunately, the sky to the north was not changing and we had at least three more hours of paddling 15 kilometers further to reach the Bridge to Nowhere and we had no choice except to go for it. Unless we were calling a helicopter to come and pick us up, we had to push on before dark as we were along private mine-land and there were no access points to the river from the highway.

The rain was coming down, so we rode the current close to the shore in case of trouble. And then, after about an hour of pushing on, the lousy weather just up and split. The sun came back. From that moment on the river was glass-smooth and the sky was blue. Our spirits came back as we paddled on. Not Larry was sending beer up to me from a bag she had packed. Canoeing was fun again! 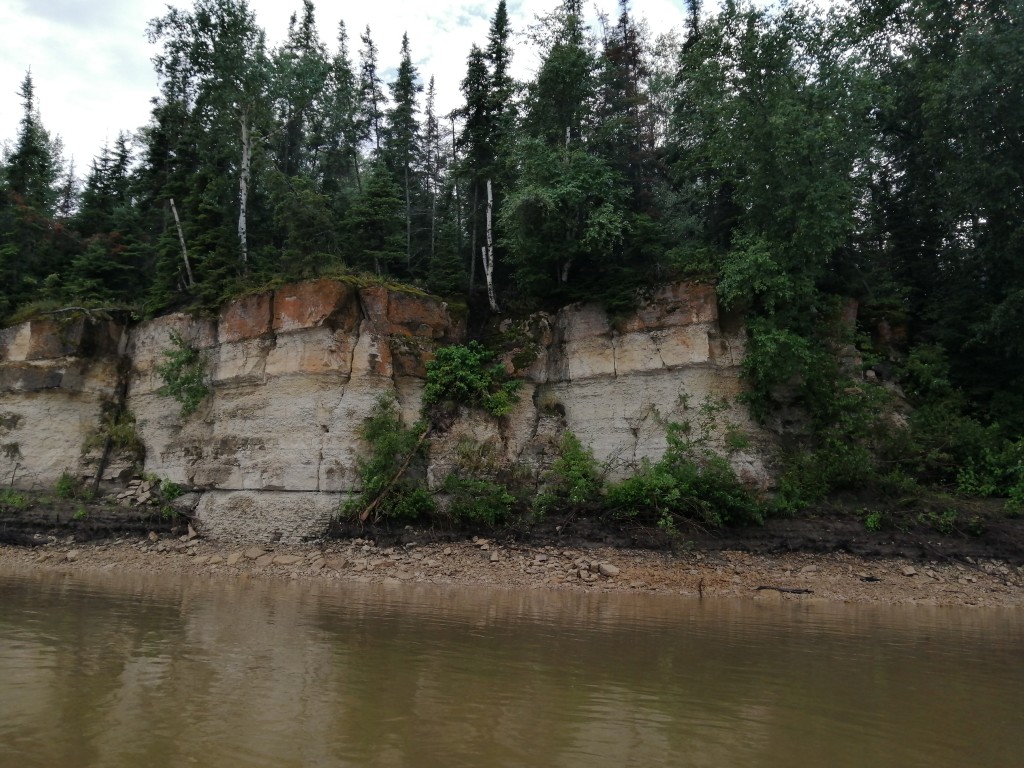 She is a pretty ride.

Finally, 11 hours from when we had left Waterways, we arrived at the Bridge to Nowhere by canoe. Not Larry’s Sister was there waiting for us. It must have been pretty neat for her as well, dropping us off 11 hours earlier right next to town and then having to drive an automobile for an hour from her house to pick us up from a place we had paddled all day to get to. It felt like quite an accomplishment.

Not Larry and I were tired, but nothing serious, and we were not that sore from all of the intensive exercise. After a quick supper we headed for hot showers which felt incredible and we were in bed by 23:00. It was a long day of emotional highs, wet lulls, and relationship compound-interest.

The Canoe Conundrum in Canada video: 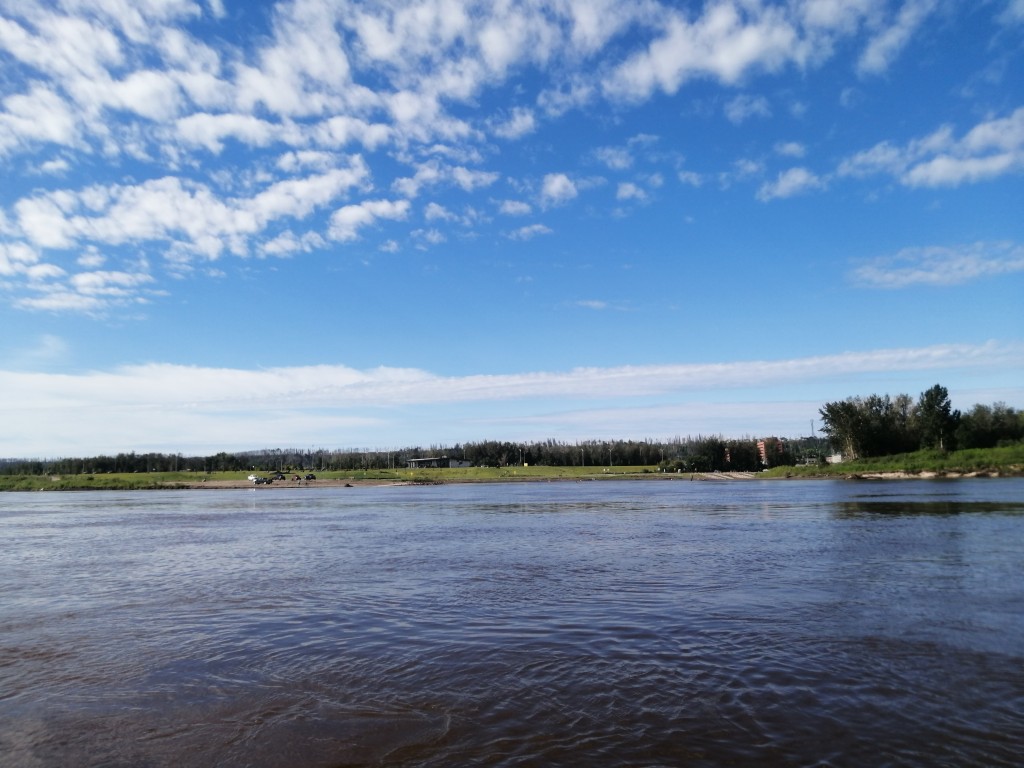 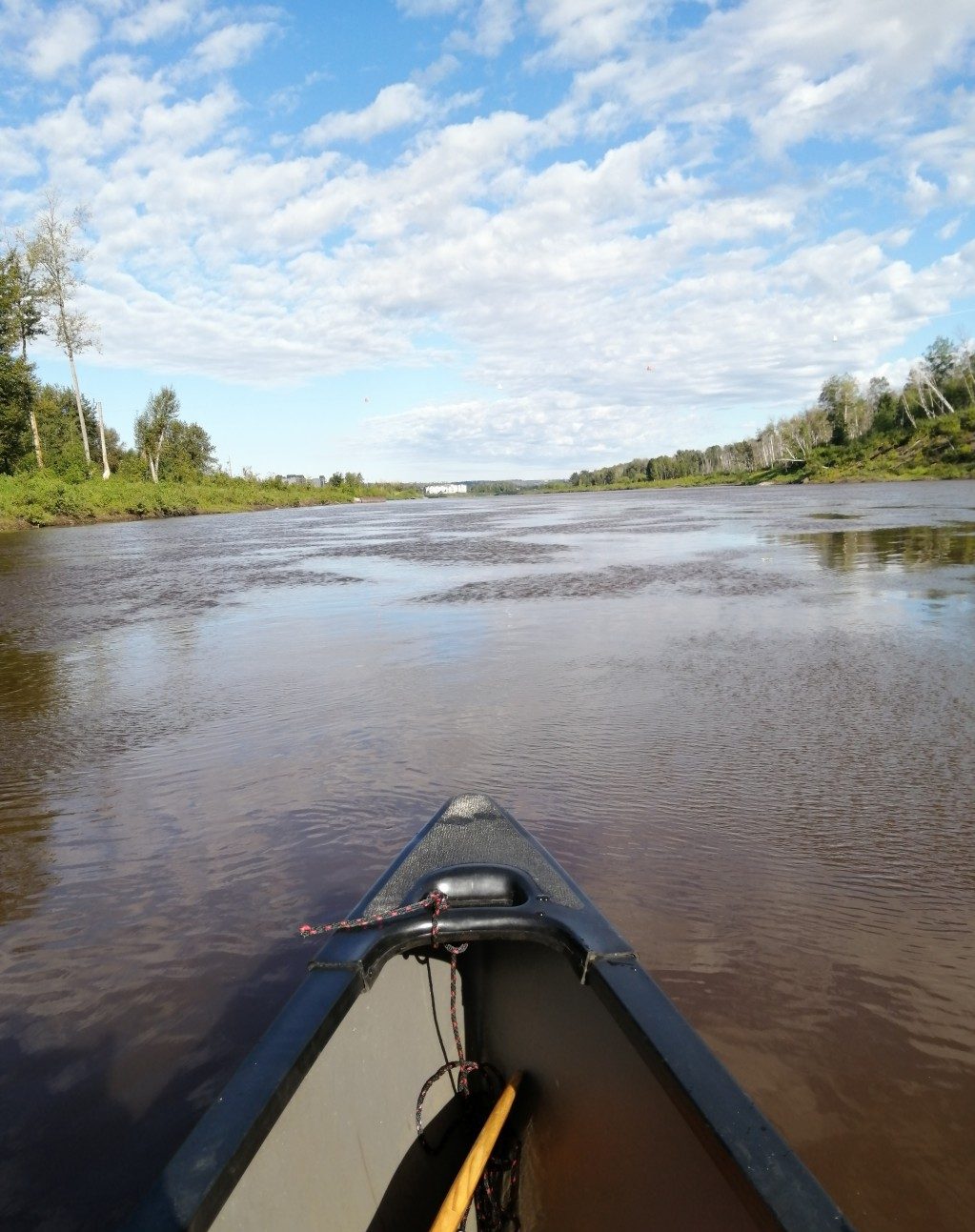 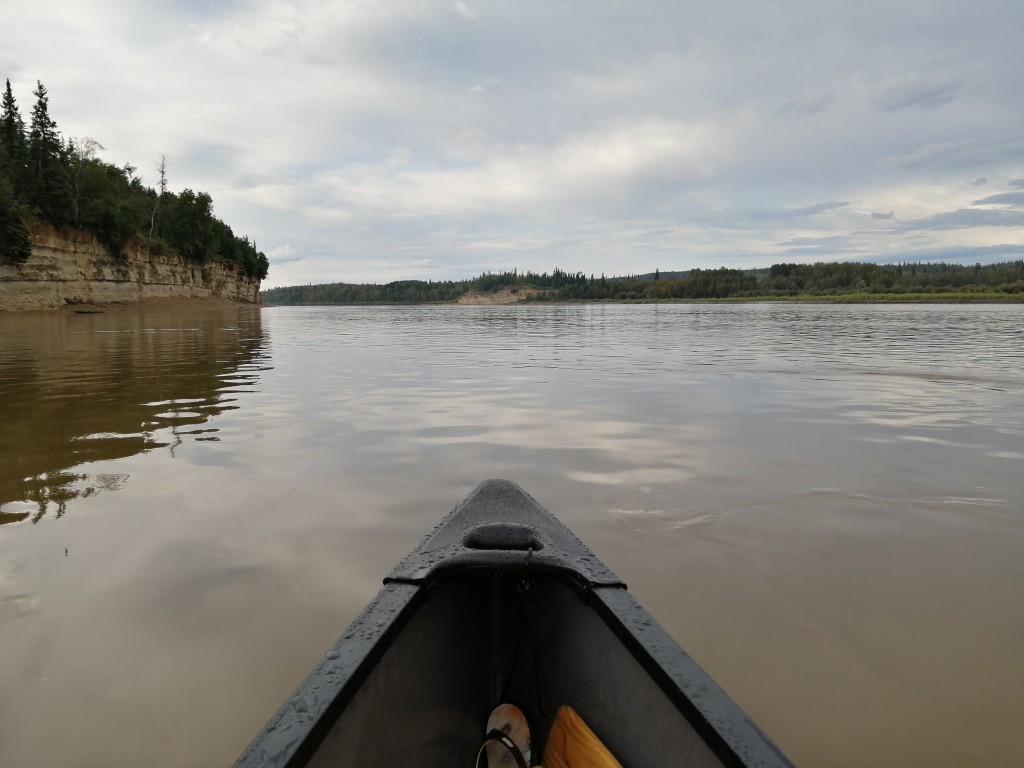 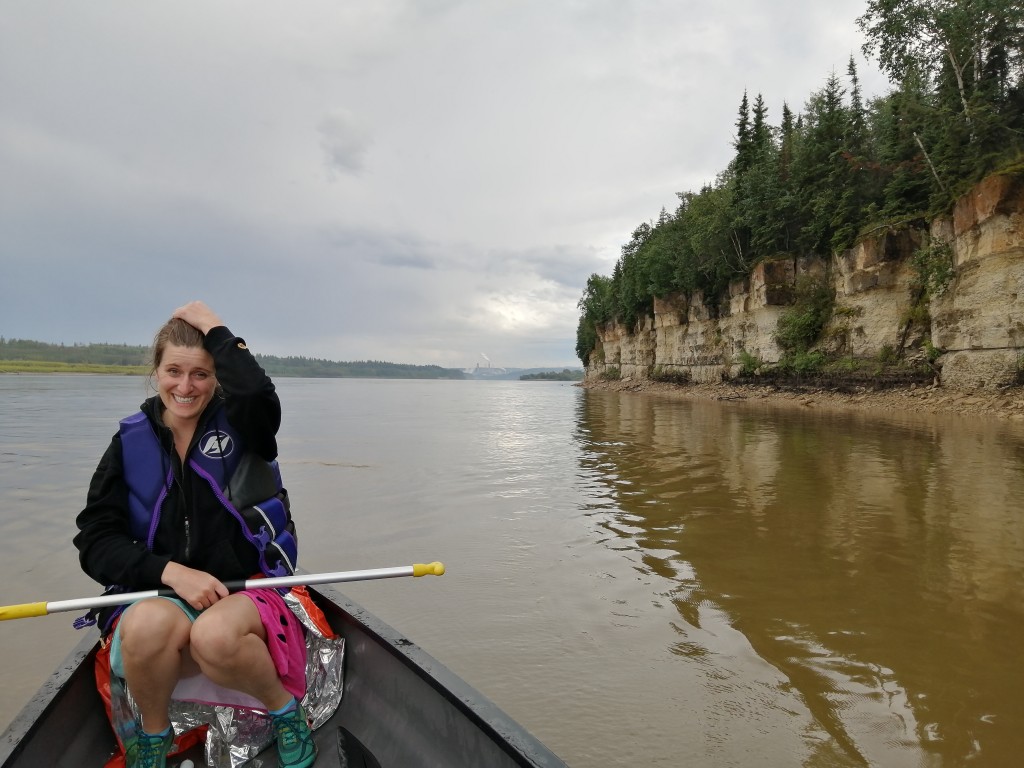 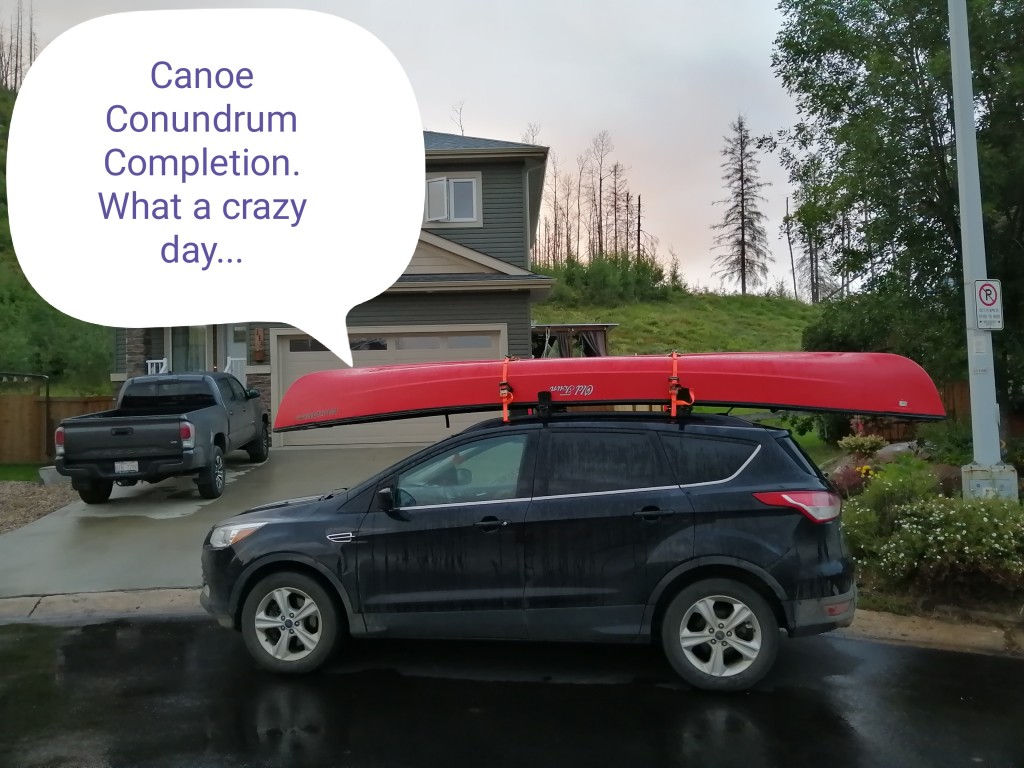 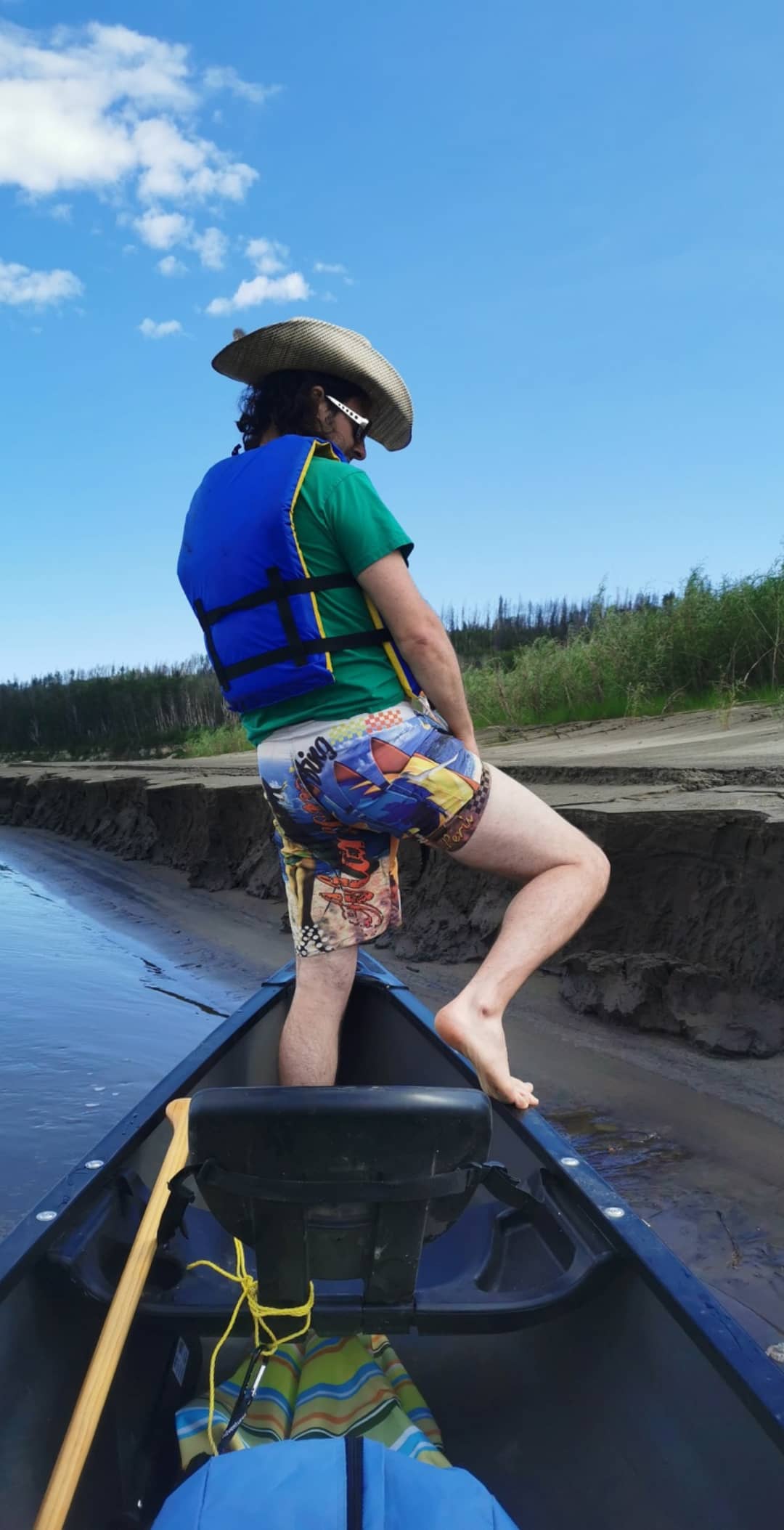 “As Emmanuel and I were walking out of the bar, we were both looking to see if we could spot Zambian Tina Turner.  A taxi man approached us and Emmanuel told him that we were looking for someone.  When the taxi driver asked who, Emmanuel told him it was the beautiful girl in the black dress.  The taxi driver told us to wait and disappeared into the bar area.  When he came back two minutes later, he had a beautiful girl in a black dress on his arm that he delivered to me.  Unfortunately, it was the wrong girl in the black dress and I did not feel like the effort anymore.  I told her she was gorgeous and told the taxi man that it was the wrong girl.”
— Life in Zambia
[View All]