Canada Driving from the Northwest Territories to Alberta. 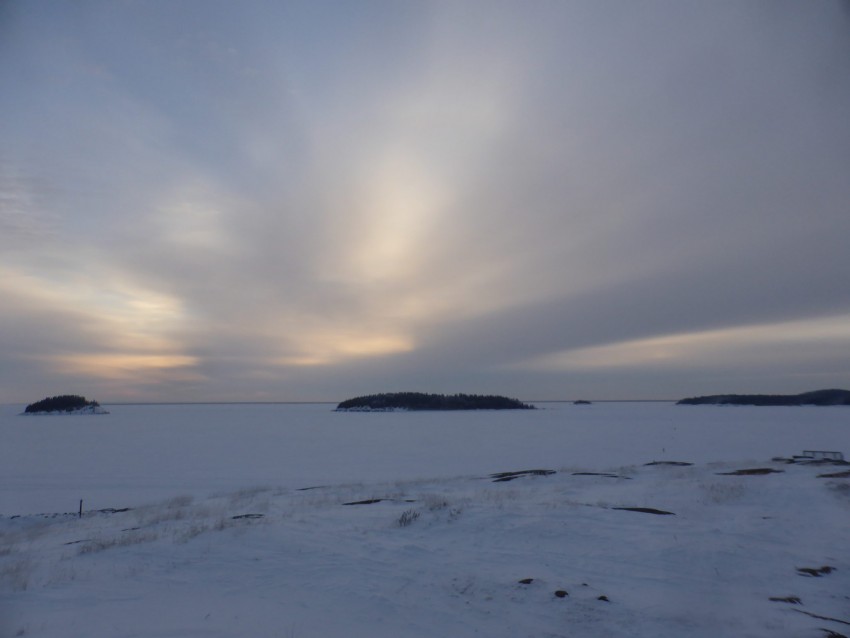 Lake Athabasca from the top of a hill in Fort Chipewyan.

I had an alarm set for 10:00. Alarms are terrible on vacation. It took some time, but Julie and I eventually got out of bed.

It was Arctic cold again, -34° Celsius, so it was hard to blame the car for not wanting to fire-up. Had it not been for our morning fire-up in the room, I may have still had a dead battery as well.

Agreed! A great taste too!

I borrowed an extension cord and got some electricity to the block-heater while we had breakfast but we still had to boost the car to get it going. Ironically, the guy who gave us a boost, Logan, happened to be a guy who grabbed Julie’s ass last night.

I was more firm than friendly with his help, yet I made sure he knew I was grateful for the assistance.

Once our car was running we headed south from Fort Smith towards Fort Chipewyan on our drive from Northwest Territories to Alberta. Julie and I both agreed that we wanted to keep heading north on the ice-roads as far as they would take us. We want to see the land, meet the people of the communities and learn about life in the north. However, Monday duties would be calling in the morning… And unfortunately, I still need to put away a lot more money.

This road from Northwest Territories to Alberta.

I was driving Julie’s car like it was a rental and had a hard time breaking that habit on the drive south. Just before we got to Fort Chipewyan we saw a lynx on the road. Awesome. Cats are so elusive. The lynx was not hanging around to make friends with us even after I stopped and tried to tempt him with, “Here kitty kitty kitty.” I now know that a cat-call does not work on a lion or lynx. Maybe it just does not work on L-cats… I need to meet a tiger.

Pee place on the ice-road.

Once we arrived in Fort Chipewyan at Barbara and Robert Grandjambe’s house, Robert took us to the museum in town to learn a little about life in the community. Fort Chipewyan is Alberta’s oldest settlement. It began because of the North American fur trade.

Robert told us that Chipewyan is a Cree word and derives from Chip meaning ‘pointed’ and Wayn meaning ‘skin’. When the Cree first arrived, they found the Dene Indians in the area who designed their bead-work, the hoods on their rawhide coats and their moccasins in a pointed shape in contrast the the rounded shape which the Cree used. There were four tribes of Indians in the region when the Cree arrived: the Dogrib, the Dene, the Slavies, and the Beaver. The Cree came to the region with the fur trade. When the fur trade came, the Cree were actually the tribe who sold the furs to the fur traders. The Cree got the furs from the other tribes and middle-manned them to the fur-traders. The Cree were also the first Indians with rifles. That does not seem coincidental…

Trapping and selling furs is slow today and Robert told us that people ask him all of the time when trapping began to die out. He told us that trapping ended when the woman moved off the trap-line. She was responsible for cooking, gathering firewood, cleaning and skinning. Without her, trapping became too much work for the men and the industry all but ended. Robert explained things about history that I had never considered in my mind before. The North of Canada is a whole new world from what the average Canadian knows about the country.

When we got back to Robert and Barbara’s house and dinner was ready. Ironic! Dinner was moose-meat sheppard’s-pie and it was fantastic. It was my first time eating moose. The meat was darker than beef. Barbara and Robert both said that they much prefer the taste of moose to that of beef.

Moose-meat is king in the region!

At 19:00, Julie and I said goodbye to Barbra and Robert Grandjambe, our new Fort Chipewyan parents. I sure hope we will see them again and we will return to the community before spring melts away the ice-road. Barbara and Robert are wonderful people to spend time with.

Lake Athabasca from the top of a hill in Fort Chipewyan.

It is interesting how between Fort McMurray and Fort Chipewyan is a division line. Everyone from southern Canada sees Fort McMurray as the unofficial top of the country. When the southerners travel, they head far south to the sun. However, Fort Chipewyan is on the north side of a seasonal four-month winter Canadian ice-road, and as a result everyone from there connects with the north. Fort Chipewyan is the bottom of the north. Fort Smith is the next community and if you ask people on the north side of the imaginary division line about about travel, they reference Yellowknife and Alaska. The north is their connection. It is a fascinating perception that changes between the white people predominantly of the south and the indigenous predominantly of the north in Canada.

Julie drove on the Fort Chipewyan to Fort McMurray portion of our Northwest Territories to Alberta trip in three hours. I am sure the drive was supposed to take more than three hours, but she managed to make it in that time. My guilt of driving her car like a rental vanished immediately after she took the wheel…

Back in Fort McMurray, Julie dropped me off at my apartment. Neither of us wanted to be back down in the south…at all…

A northern-plan is now turning in my brain… That Northwest Territories to Alberta trip seems to have been a distracting lure.

“I finished a major project today. I typed out 30 pages of my grandfather’s brief autobiography, to go along with my great-grandfather’s brief autobiography of about the same length. The part of my grandfather’s, who died in 1989, was handwritten and I am certain that no one had ever read it before I went through it. I have come across a pretty special family heirloom. I gave it to dad. Handing him the autobiography of his grandfather and that of his father was pretty awesome. Great-grandpa’s is about leaving England to come and start a life on the empty prairies around 1910, starting our farm in 1913 before Big Beaver was. Grandpa’s is about growing the farm going and battling through the Dirty Thirty’s as well as courting grandma and how he wooed her after riding to see her family on horseback. It is pretty lucky to have such family history written down.”
— Generational Memoirs
[View All]