I am not sure where my dirty socks and underwear go from the time I take them off at night until I get up in the morning to start the day. They are just gone. Not Larry does something with them, but I am yet to know what it is. Out of curiosity, I have looked around the motorhome and have yet to locate their next move… 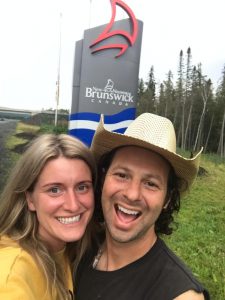 We hit the road as the rain was coming in and headed for Canada’s only bilingual province, New Brunswick. Not Larry did some snoozing as Beatrice and I pushed east. Everyone is a little tired. But, we rolled onto the very nice roads of New Brunswick, with ‘keep the moose off’ fences which align the forest on each side of the highway. That is pretty amazing. There is probably not a lot of roadkill in New Brunswick.

It was a drive-all day kind of day and Not Larry held the wheel for the bulk. At 21:30 we pulled into Fredricton, New Brunswick, a capital city that was never more than a word I had to put on a map when I was in the 5th grade. Now, it is a word I had to label on a map when I was 10, it is a blue water-tower with the city name on it, it is an Esso where Beatrice took $200 worth of fuel and then she did not want to start again next to the fuel-pumps.

We have a spare battery and booster-cables that we hooked up, but still there was nothing doing nothing. I tried the lights. Full power… So, it was not the battery. I jiggled the key in the ignition-tumbler. Nothing. So, I grabbed a hammer and crawled under Beatrice. I banged on the starter a bit and then I banged on the solenoid. Not Larry tried the key and voila, Beatrice fired right up! The old-bang-on-something-with-a-hammer trick worked again! Beatrice, you old sweetheart!

Travel Tip
Always carry an old pair of cover-alls if you are driving old vehicles on long trips. Always. You will end up under that thing at some point and probably do not want to cover your good clothes in dirt, grease, and oil.

Not far out of Fredricton, it started raining. The rain on the windshield allowed us to find out that Beatrice’s windshield-wiper motor in Beatrice has run out of steam after 40 years of service. It would only pull the wiper blades half-way across the windshield and there they would stop. Nothing would make them move further. So, I had to drive for two hours, in the rain, with no wipers. Then it got foggy. The situation was no so bad when no other cars were around, but when a vehicle was coming our way on the divided highway, the glare was awful and I could only stay on the road by using the solid white line to my right and the dotted line to my left as guides. At times, I had to have Not Larry’s eyes glued to the road as well to help guide me when visuals were extremely poor during head-on glare. There were no rest areas on the drive so we just powered through with a powerless wiper motor.

FYI
A hydroplaning motorhome with no windshield wipers on a rainy and foggy night is a pretty awful night.

After about two hours, we arrived in Sackville, NB, where Not Larry’s brother lives. We pulled in to spent time with his girlfriend, Tasia, who had pizza awaiting our arrival. She and Not Larry where chatting while I fell asleep on the couch. That drive completely exhausted me…

Tasia came home from work and took Not Larry and I out in Sackville a small town with an elite university where everybody knows everyone. We ran into people Tasia knew everywhere we walked. A festival called Sappyfest is taking place, so the town has plenty of vibrance.

After a walk around the Water Foul park we went to a secret beach that is not really a secret, but it is beach where a few people go near a town called Petit Cap. The drive to get to it was green and beautiful and then I found out that beaches in New Brunswick are quite a gorgeous surprise. The one we arrived at was very pretty with its soft brown sand containing bits of red sand mixed in.

And, it was so nice to spent the day at a beach.

We spent a lot of time in the sun, soaking up the rays and then went into the water. This is the first time I have been in any portion of Canada’s Atlantic Ocean.

When we came out of the water and got ready to go. Once in the car, Tasia took us to Quai Aboiteau Seafood Paradise, where we met with her friend Shelly. The restaurant was busy, and we had a two hour wait for food, but there was a two-piece band on the rooftop terrace: a songbird woman who also tore through all of the guitar parts, and her bandmate was a drummer who had his hair teased like it was 1985. Not Larry suggested that was beach hair. Either way, he looked awesome.

The specialty food here on the coast is fried-clams, and that was what our two hour wait was for as we drank beer. Seated next to us at the table was a couple with a boy who was about 12 years old. His father told me that the his boy loved my sunglasses. Their food soon arrived, an actual bucket full of seafood. Inside of the bucket were a couple two lobsters, four crabs, a lot of clams and more. I asked the man if I could pick the bucket up feel the weight of the seafood inside. I was impressed with all that came in the heavy bucket for $60. 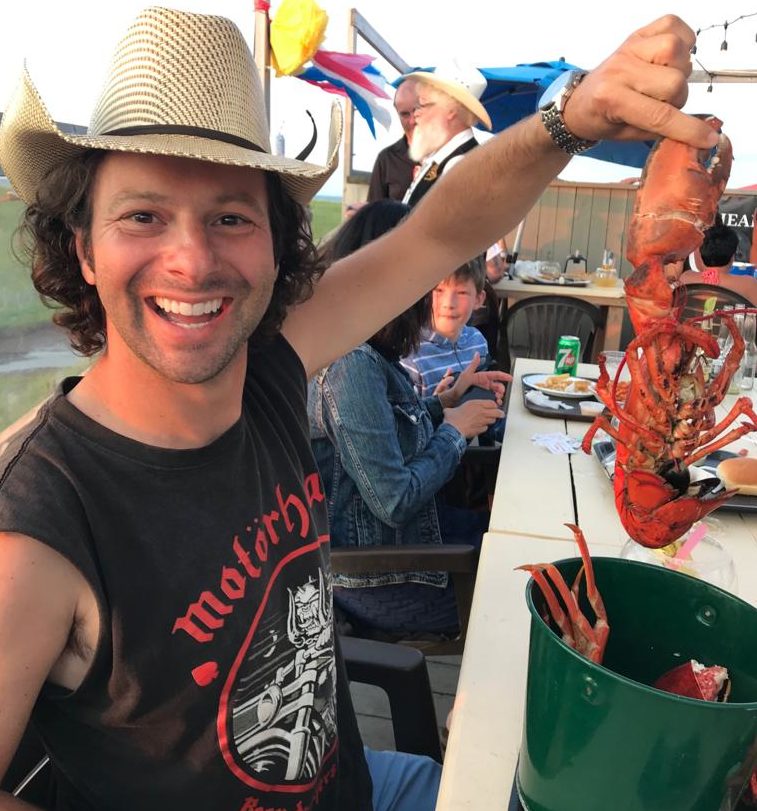 A bucked of delight!

Fifteen minutes later as we were enjoying the music, the sunset, and the beer, the man pushed the half-full bucket our way and told me that they were full. He was smiling and said they were donel. Inside remained a full lobster, two crabs and a lot of clams. He also pushed over a full basket of sweet-potato fries and a full Corona. He said the boy was not feeling well and that they were heading home. I took off my sunglasses and handed them to the boy. He did not know how to reach and just looked at me as I was holding out the sunglasses. His smiling father looked at him and said, “Take them!” It was awesome. That boy was so freaking happy at the trade and immediately put them on his face! We ended up with a massive feast for an old pair of sunglasses! 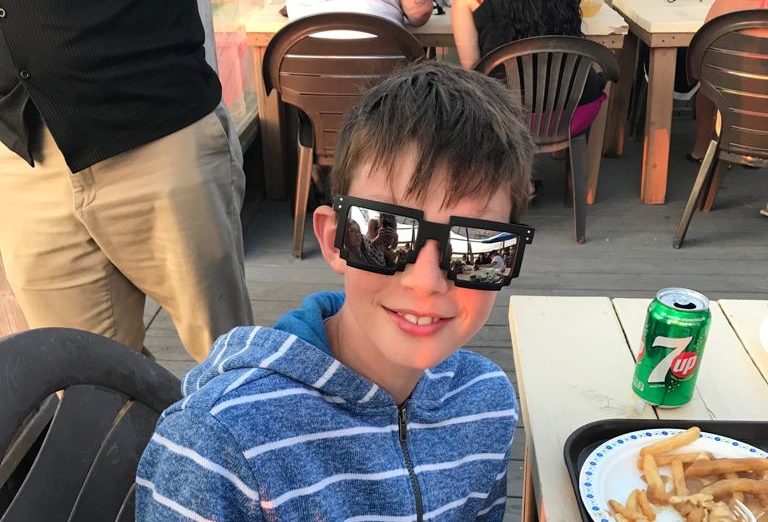 It was fun to give those to this young man.

Later, our fried clams arrived. Friend clams are tasty, but they could be popcorn shrimp or any other fried seafood of the like. However, the clams still have grains of sand in them from time to time, and I am not crazy about how that feels when my teeth crunch it. I was so full after our meal that I could barely move and blamed a belly full of sand.

When we got back to Sackville, Tasia stayed home as she had to work in the morning, but Not Larry and I went out for the last night of Sappyfest. The town is great and it is full of character as well as characters. I have never been to a place so androgynous in my life. I was so over-clammed from dinner though that I was not able fully enjoy the wackiness of the people and the entertainment around us. Not Larry ran into a couple of friends she had previously made through her brother who seems to be a celebrity here. I drank vodka because my stomach could not handle the bloat of the beer in addition to the sand and the clams. Not Larry and we went home when the town was shutting down as the festival finished. It is great to be here.

I wish we could spend some serious time on this east coast. I love the buildings, the people are friendly, and there seems to be happiness all around.

“You can make a lot of people happy when you drive down back roads handing out cigarette tobacco and alcohol.”
— Learning about Tanzaina
[View All]