Well this is fantastic…. “Either you’re happy with very little, free from all of that extra luggage, because you have happiness on the inside or you don’t get anywhere!  I am not advocating poverty.  I am advocating sobriety.  But since we have invented a consumer society, the economy must constantly grow.  If it fails to increase, it’s a tragedy.  We have invented a mountain of superfluous needs.  Shopping for the new, discarding the old…that’s a waste of our lives!  When I buy something, when you buy something, you’re not paying money for it.  You’re paying with hours of life you had to spend earning that money.  The difference is that life is one thing money can’t buy.  Life only gets shorter.  And it is pitiful to waste one’s life and freedom that way.”  – Jose Mujica (Uruguay President 2010-2015)

My morning began by asking for a pail of hot water, which was brought to the door of my room in Gisenyi.  That was my shower this morning.  I have never had the “bucket of hot water” treatment before.  Usually one has hot water in the bathroom or you are at a “cold shower” hotel.  I have found a hybrid.

I have a stiff neck from the dirt-path teeth-chattering countryside journey yesterday.  A stiff neck from a car ride!  As if!  Body, don’t let me get old!  I started giving you greens as a part of your fuel consumption.  I did not want to have to do that, but I did it for you.  Now, be fair…
Much of the day was spent chasing around information in Gisenyi.  I was shopping about going to see the gorillas today.  It is going to be $750 for a one hour permit to see them in Rwanda.  I can also do it in Congo for $500 and all of the extras are going to cost me about an extra $250.  It is impossible for me to get a visa for Congo while I am here.  You need to apply for it from your home country and you need an invitation letter from someone.  However, you can get into Congo if you buy a Congolese product…such as gorilla trekking.

I would much sooner go and look at the gorillas in Congo just to get inside of the borders of the country to see the people, but a man at the Rwanda tourist bureau sort of scared me out of Congo.  It was smart of him, but it would also be smart of me to follow his advice.  There is also a place called Nyiragongo which is a volcano that one can climb just on the inside of Congo, and you sleep above the cavern with the lava bubbling below in the world’s largest lava lake.  But that is $300.  I wish I had money to do and document all of these things.  Life only gets shorter and the body wears and breaks down…

So now I am worried about going to Congo.  The man at the tourism bureau told me that many kidnappings happen in Congo, and that, “In Congo, they believe that it is better to go to court with a dead body than with a live one…”  Fear mongering.  Or maybe it is accurate.  But it makes me too nervous to take the chance… 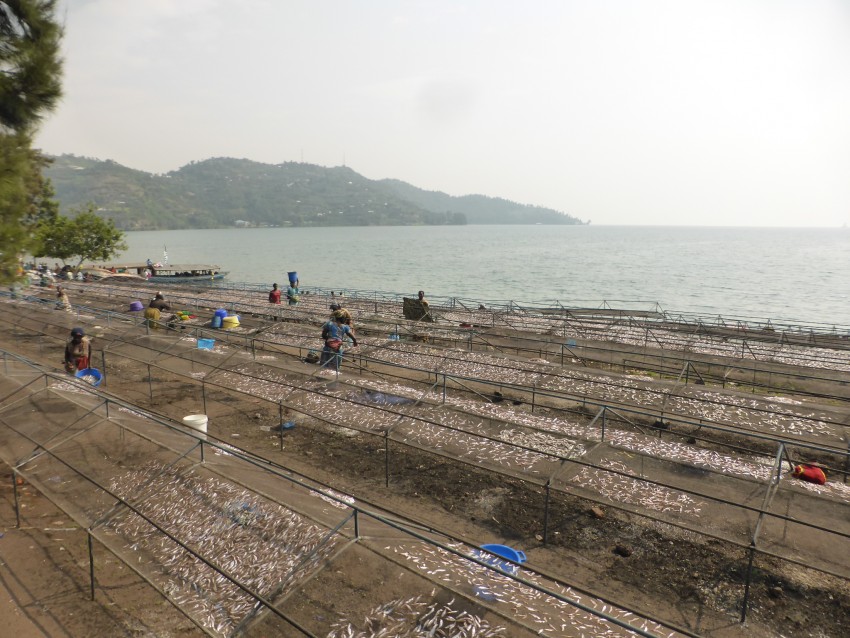 In the afternoon, I tried to get my way into the brewery.  I told them I was a journalist.  The secretary told me that I needed to have a letter applying for a tour of the building.  I felt like I was spinning my tires in Gisenyi all day.

Philip from Amsterdam sent me a message because he was also in Gisenyi. I went to meet him for a beer at his guesthouse.  He left Kibuye at 07:00 yesterday and arrived at 16:00.  I left yesterday at 10:00 and arrived at 19:30.  He rode a bicycle for the 95 kilometers.  I was on a motorcycle and in a mini-van.  He actually made better time than me.  Incredible… 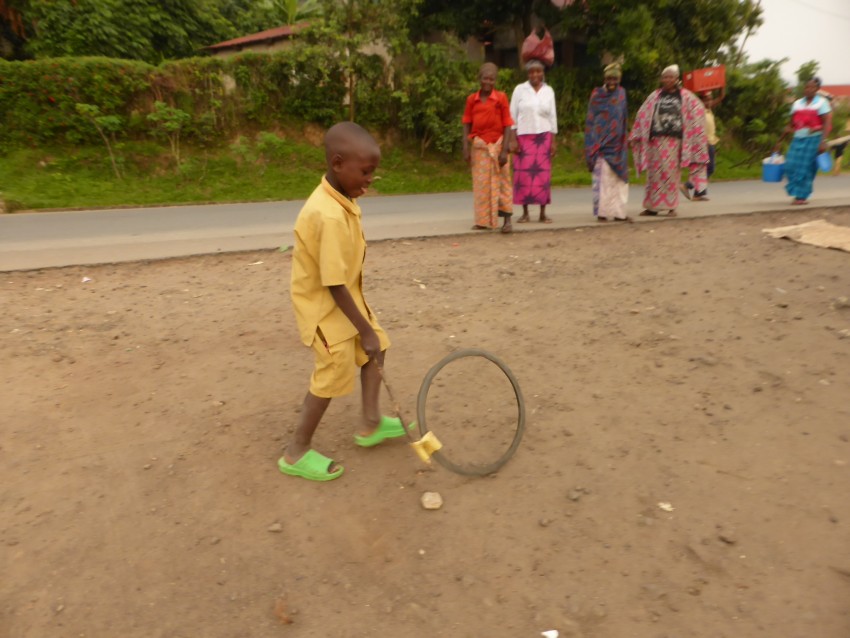 A tire and the handle cut off of a plastic container attached to a stick. I had him show me the way to make this work. I like his “tongue-out” concentration. It took me three tries to make it work as the locals laughed and enjoyed my attempts to learn.

Things of the day:
-Some kids said “Ni Hao” to me in passing today, assuming that since I am not African, that I must be Chinese….  Funny!
-Sometimes kids walk beside me in silence because we cannot communicate, but they just want to walk with me because I am from somewhere else.  A small boy walked beside me for at least a kilometer today.  The same thing happened two days ago.
-I get tired of seeming to be the dumb foreigner all of the time on my travels because I am from somewhere else.  Sometimes I deserve it though.  Today, I went to buy a mango from a lady on the street.  After I paid her I asked if she could cut it up for me.  Locals are better at that than I am.  She did not have a knife, so I handed her my jackknife.  She looked confused at me, made four easy slices into it and handed me what was an avocado.  Ohhh… 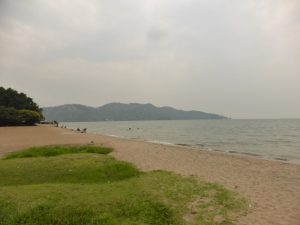 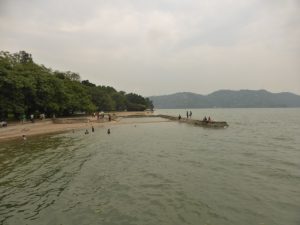 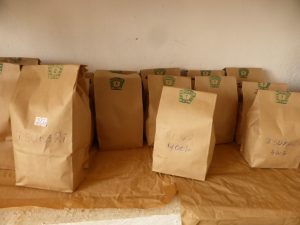 I like the packaging. You know this was done by a grandmother. 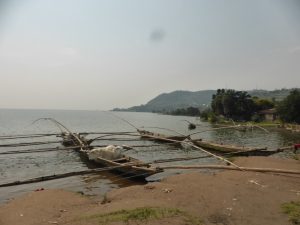 Strange boats. When I tried to ask what the poles were for, all that anyone could tell me was ‘Fishing’. 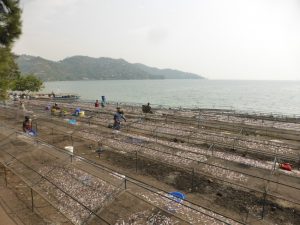 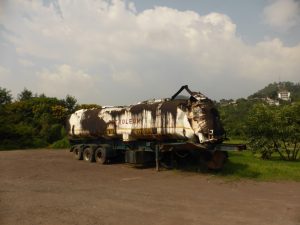 This guy probably got fired. 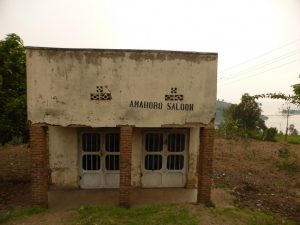 That is quite a saloon. 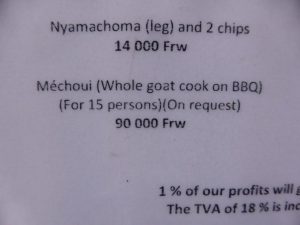 Whole Goat on the menu!

“I feel like I saw Taipei when I was here in June, and there was not much to do or see. It seems like a complete lack of fun fills the air and streets of this city. I now had a nine hour layover. You know a city is boring when you contemplate just having a sleep in the airport floor rather than bothering to waste space in your passport with 'entrance' and 'exit' stamps. I always ask the immigration people to stamp my passport in specific places to manage space wisely so as not to fill passports so fast. There was a small space on page 25 of my passport that an immigration officer in the UK would not use because there was not enough space for the stamp. I pointed to the same spot in my passport to the Taiwanese immigration officer and when he agreed to entrance stamp me specifically there, I decided I would venture into the country for a few hours. Had he not, I was just going to sleep on the floor instead. I have become a passport-space-management travel snob...”
— Taipei, Taiwan
[View All]