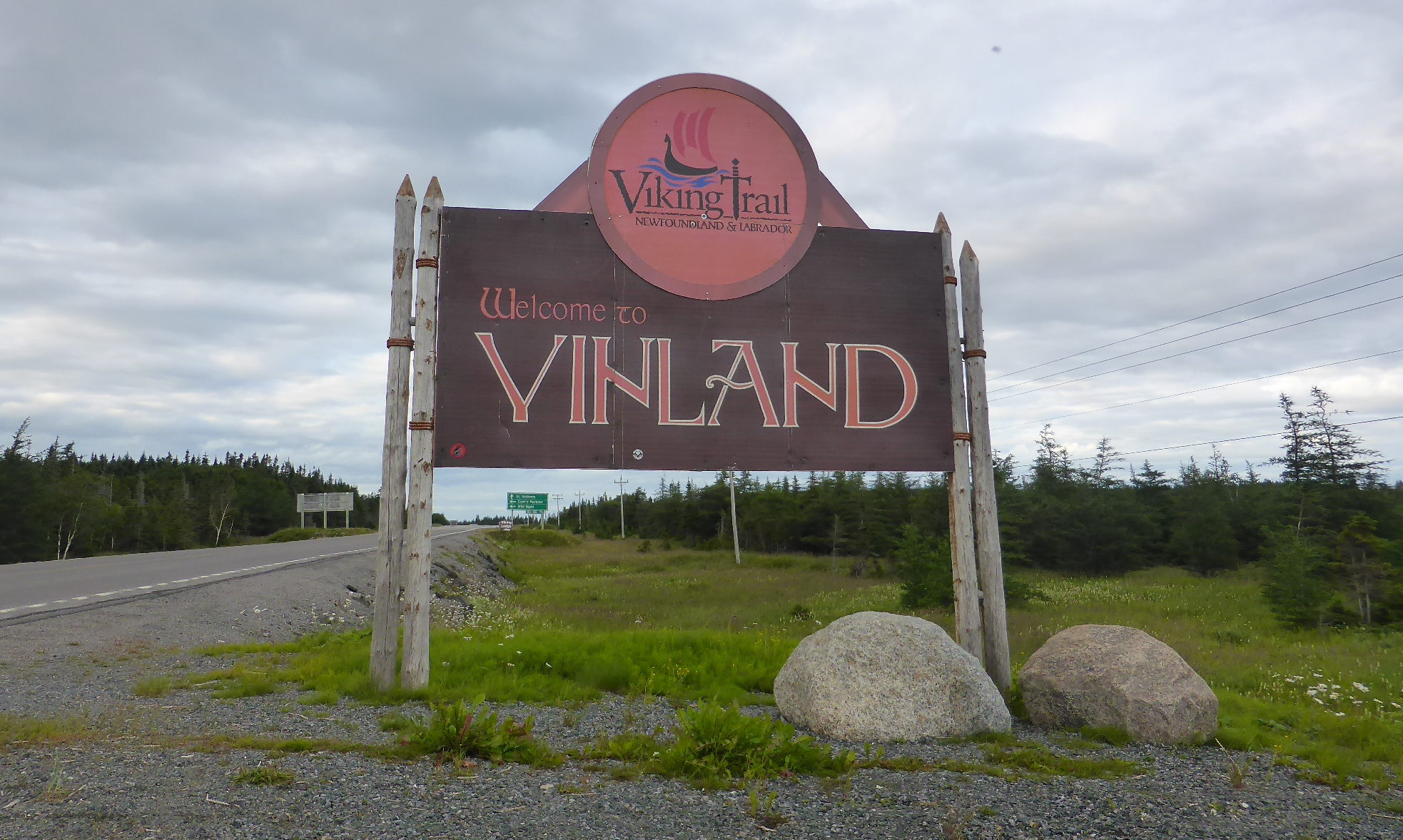 Not Larry is sick with a bad head-cold, has sore ribs, and a stiff neck. She is a wreck, so we had a sleep in today. Her body requires some rest…

The countryside up in the Northern Peninsula of Newfoundland and Labrador is so beautiful. The only problem is that there is never any mobile phone coverage so uploading articles is difficult in these parts. It was actually easier to find internet in Africa three years ago than it is to find it today on the northern peninsula of Newfoundland and Labrador in Canada. But, limited internet is a good thing. And, the people are really great.

We stayed in a bead and breakfast last night that was terrific. This morning the internet would not work. When I was in reception, paying the woman who owns the place and she said in her accent, “The tunder and lightnin’ came troo last night and screwed everythin’ up…Oh, I shouldn’t be usin’ those words.” It was cute innocence! 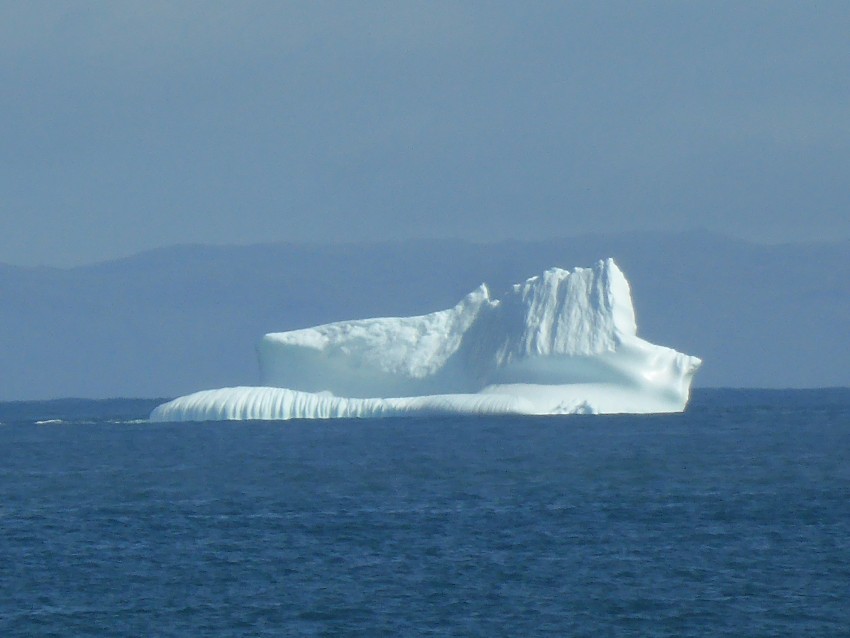 We got packed up and moving towards L’Anse Aux Meadows, but before we arrived there was a giant iceberg dead ahead in the ocean. It was a giant iceberg of titanic proportions and I have never encountered one before. A 20,000-year-old block of freshwater ice had come to warmer temperatures to retire and disintegrate. It almost looked enchanting in some way as we stared at it from the edge of the water on the top of the peninsula. This is also where the Vikings were the first Europeans to arrive in North America somewhere between the year 998 and 1000. This point is where the first European exploration of the Americas began. We headed to the L’Anse Aux Meadows historical interpretative center to the site of the ruins. It was $11 per person to enter. 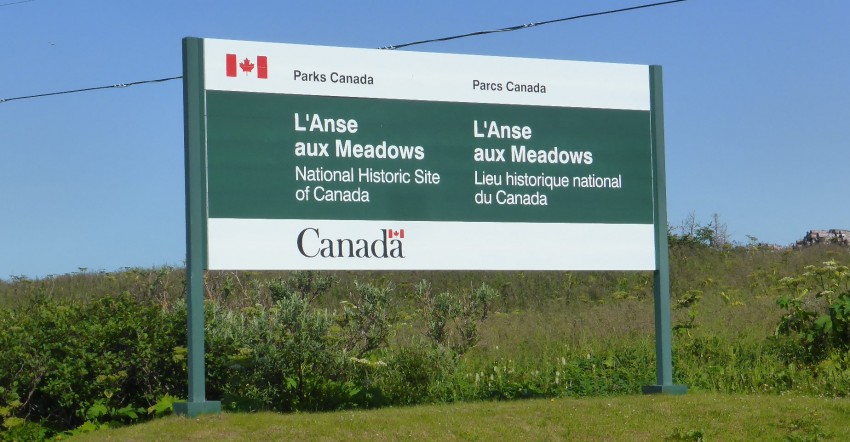 From a sign on the wall inside of the L’Anse Aux Meadows Interpretive Center:
– “Who Were the Vikings?
Throughout the exhibit, Scandinavians of the medieval period are referred to as Norse The word is derived from norrænn tunga – Old Norse, their language. A thousand years ago, most Norse people were farmers and traders, but raiding became a common way to gain wealth and fame. The term viking, Old Norse for raider or pirate, is properly used only to describe men who were engaged in the raiding. Be that as it may, the period from 800 to 1050 is often called the Viking Age. Similarly we live in the Space Age, but few of us are astronauts.”

– “Coasting Across the Atlantic
The Norse could accurately determine latitude (how far north or south they were), but not longitude (how far east or west), so they tended to sail with land in sight whenever possible. By coasting like this, they could easily navigate around Europe, but it became more hazardous as they explored farther into the North Atlantic. By geographic chance, landmasses lay like stepping-stones between northern Europe and North America.”

– “…For Aboriginal peoples long before and after the Norse, this was a regular camp for fishing and other activities – a familiar camping site along heir seasonal travel routes, at the heart of their home territory. For the Vikings this was not home, but a precarious over-wintering and repair station at the fringe of the known world. The five to ten years that the Norse used their camp 1,000 years ago was a brief interlude in the long history of this place.”

100,000 years ago, man set out from the starting point in Africa, spreading out across Europe, and Asia, crossing to North America on the Beringia land bridge, and from there they spread out across North America. When the vikings arrived at L’Anse Aux Meadows which they had previuosly named Vínland, the would have certainly encountered the indigenous peoples at some point over the next ten years of exploring.

When that encounter happened, the encirclement of the earth had been completed with the meeting of those two worlds that started out together in Africa 100,000 years earlier.

That is the most interesting thing that has been brought to my attention in a very long time. 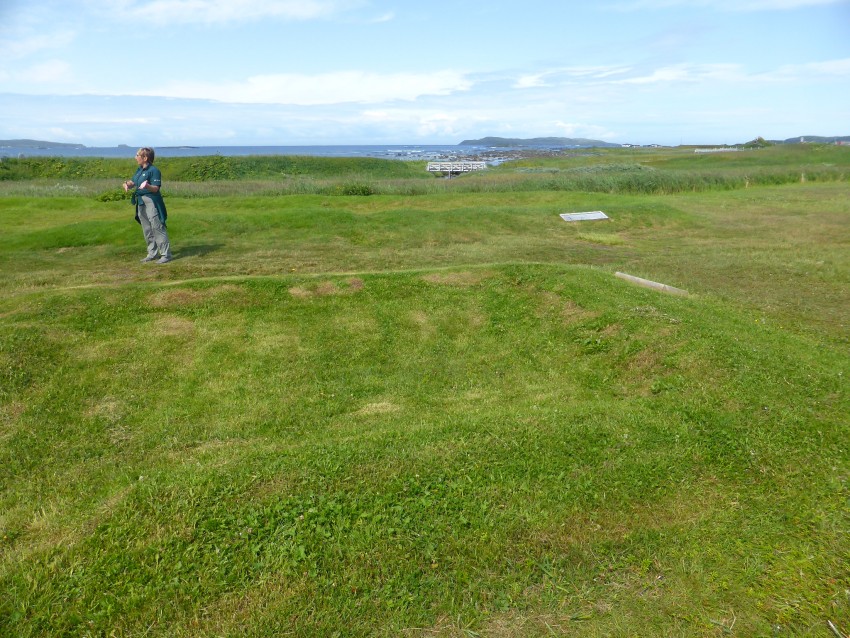 The under-ruins of the Viking housing and workshops.

In 1960, Norwegian explorer Helge Ingstad and his archaeologist wife, Anne Stine Ingstad, were certain from the lay of the ruins under the earth that L’Anse Aux Meadows had been a viking settlement. In 1961 excavation began. The locals of the area of Newfoundland had known about the site for years but they assumed it was an indigenous camp as indigenous occupation in the area went back 6,000 years. The harp seal arrives in abundance on the shores of L’Anse Aux Meadows and that hunt is what kept the aboriginal peoples coming back. Perhaps that is what initially allured the vikings to the same place as well. 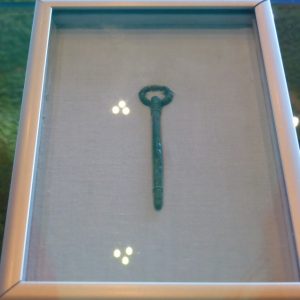 The bronze Norse cloak pin. AKA: The Deal-Sealer!

In the excavations that took place in the 1960’s they found these typical Norse items:
– A bronze pin that was commonly used on a Norse cloak.
– A sharpening stone.
– A stone oil lamp.
– A broken bone knitting-needle and a spindle.
– One hundred broken nails.
* With the discovery of these six items, history has been re-written. For whatever reason, Christopher Columbus is still in our history books though it seems to require an asterisk for the past half-century.

Iron work first made its mark in the middle east about 4,000 years ago, and the Norse were skilled at smelting about 1,500 years before they arrived at L’Anse Aux Meadows on ships waterproofed by wool dipped in tar. The vikings would be the first to do iron work in the Americas. Bog-ore was abundant in the region to make iron though it was fairly lousy as only 1/10th of the material is workable. They vikings certainly recognized the abundance of bog-ore as well that likely drew them onto the shores of L’Anse Aux Meadows. Whatever the case, the vikings arrived about 500 years before Columbus gained fame for his effort. And Columbus is thought to have accomplished his mission using old viking and Chinese maps. So, that the vikings had made the trip a half of a millenium earlier is quite a feat. Personally, I find exploration quite exhilarating, but I am also not doing it from one of the four ores of a viking ship, paddling for weeks on end in the freezing north Atlantic. Those guys were a lot tougher than I and I find myself under the impression that I would not fare so well in a duel against even the weakest viking. Something also tells me I could not have won them over on charm and wit alone…

L’Anse Aux Meadows is a truly amazing place to visit and to have a brush with history. It is even more incredible when you think about how the entirety of history has been re-written with the finding of six small items. That is it, and history is a suddenly a newer old.

And then considering the thought about the meeting of the vikings and the indigenous peoples which completed 100,000 years of separation during exploration… That is quote a thought, and it was worth driving all of the way to L’Anse Aux Meadows just to have been given the opportunity to mentally process that situation… Wow… 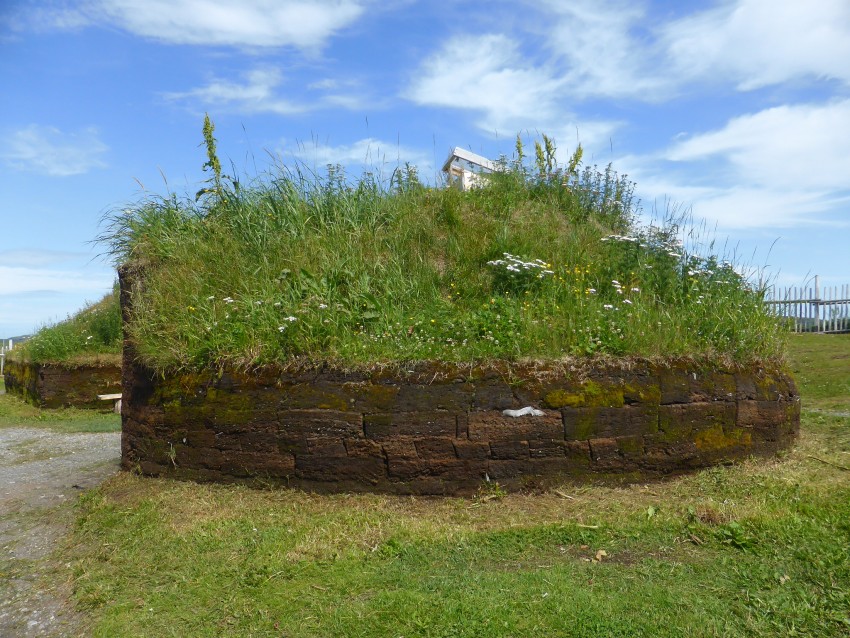 On the drive south we stopped for fuel in a small mom and pop station where the older man was eating a popsicle while pumping our fuel. I took a photo of him doing the deed because it was such a funny combination of eating something so sweet while pumping something so toxic. He laughed and said to me, “It’s better than smokin’ a cigarette!” The people here are so entertaining.

Not Larry and I headed south after leaving the L’Anse Aux Meadows interpretive center to race for Woody Point, Newfoundland, where the Writers of Woody Point literary festival was taking place. Shelagh Rogers, who hosts the Next Chapter on CBC radio would be the host of the festival and I felt that she was an important person to have a conversation with. So, we drove fast to get down towards the bottom of the peninsula…

For the video of the Northern Peninsula, either click at the top or give this here a click: 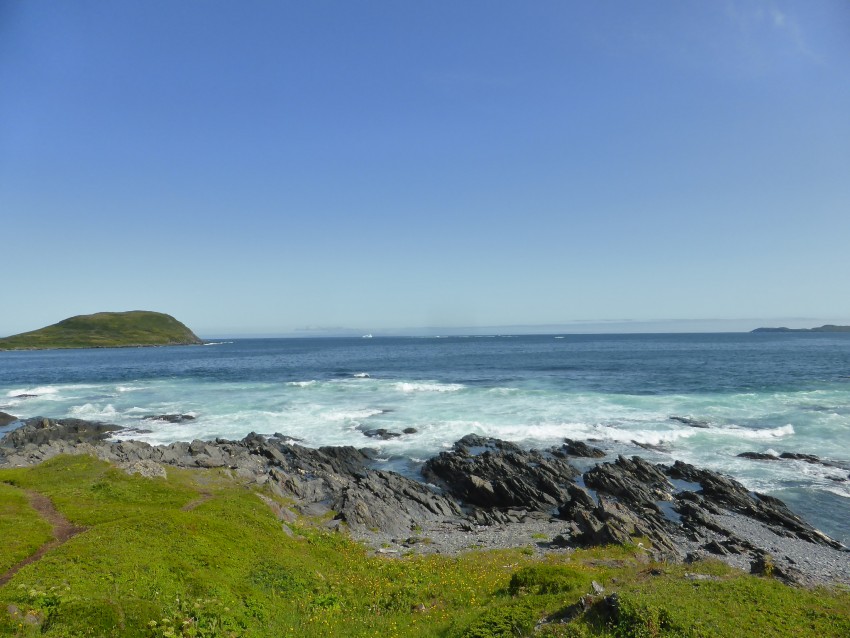 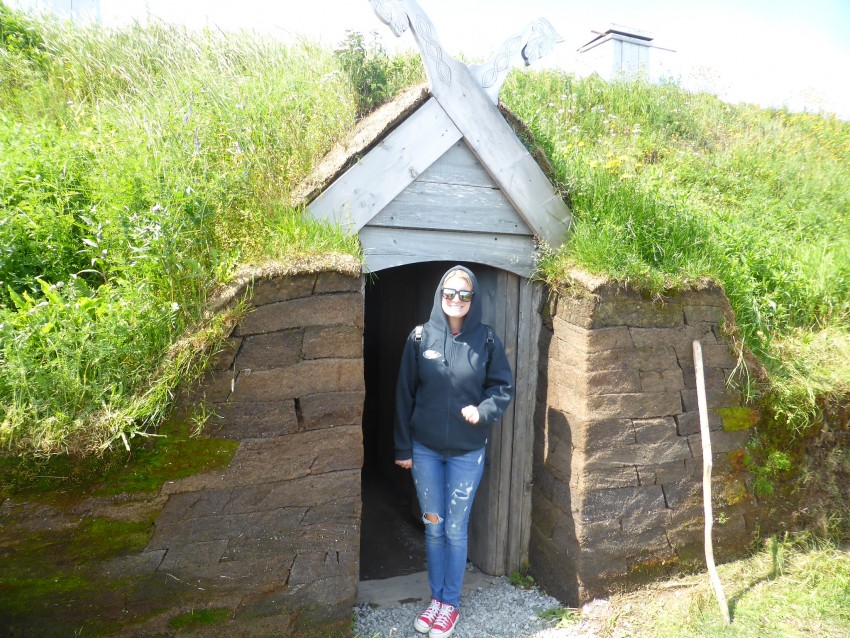 Not Larry being Norse and Gnarly. 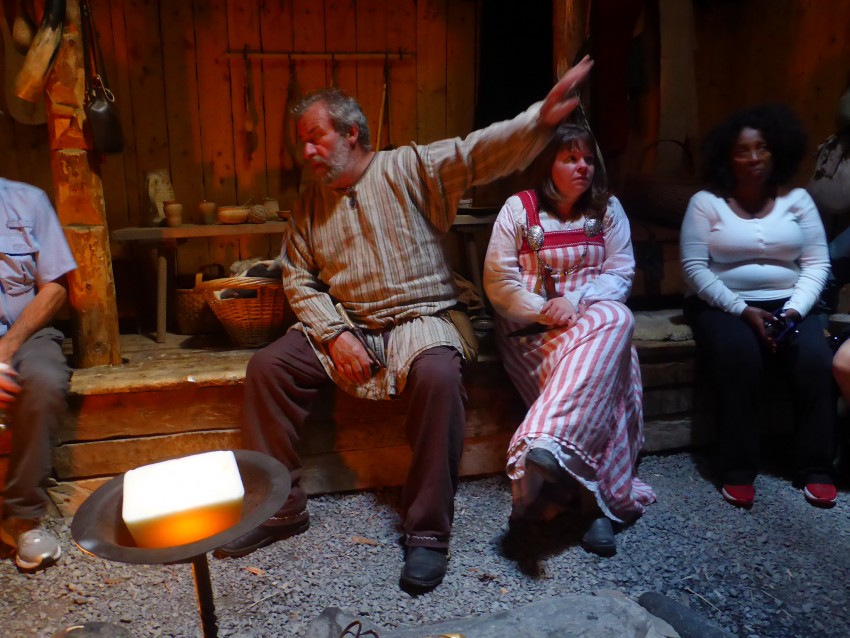 Norse reenactments… Accents need a bit of brushing up from Newfie to Norse. 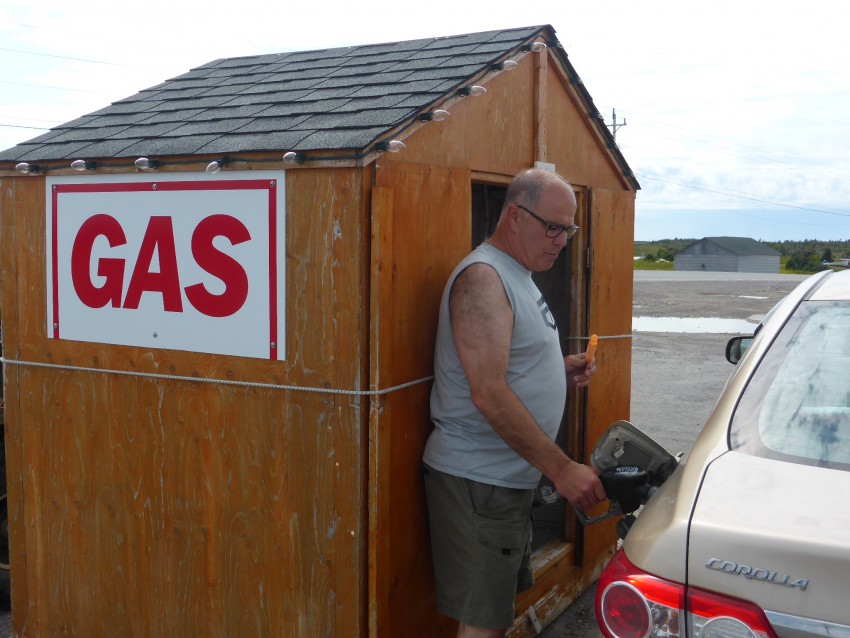 “I learned this today. Fascinating: -The closest star to our sun is Proxima Centauri, and it is a little over 4 light years away. At the speed of light, it will take four full years to get to the next closest star! Think about that for a moment... That is amazing! That is freaking far! Just to borrow the light of the neighbour's garage is 4 light years of travel. Pack a lunch! -Light travels over 10 trillion km in a year (10,000,000,000,000 km if you want to count zeroes). -The space probe, Voyager, travels at 56,000 km/h. At that speed, it would 80,000 years to get to Proxima Centauri. Just imagine the windburn (I know there is no atmosphere! This is just for imagination. You are probably not really going). Think about the time you stuck your head out the window of a car at 160 km/h...Voyager travels at a speed 350 times that speed. So, 80,000 years of imaginary windburn later, you would arrive at your destination that light had beat you to by 79,996 years.
Other fun numbers: -It takes 8 minutes for the light of the sun to get to us on earth (though some people seem to live in eternal darkness). -At the speed of light, it is four full hours to get to Neptune, the furthest planet in our galaxy (sorry Pluto, you have been bumped…) -The Earth rotates at 1,600 km/h (on restless nights, I roll over in bed at 3 km/h). -The Earth orbit of the sun is at 100,000 km/h. This rock is ripping doughnuts at 100,000 km/h! -The sun (and us too) moves through the Milky Way at 500,000 km/h. -And finally, the Milky Way moves through the universe at 1.5 million km/h (1,500,000 for the zero people!) Those are some fascinating numbers! Tell your friends during your coffee break. Make yourself sound smart! No Big Beaver Diaries reference needed (I borrowed these numbers too...just in case you thought I may have been busy with a pencil and paper figuring them out for myself).
”
— Fascinating Facts
[View All]