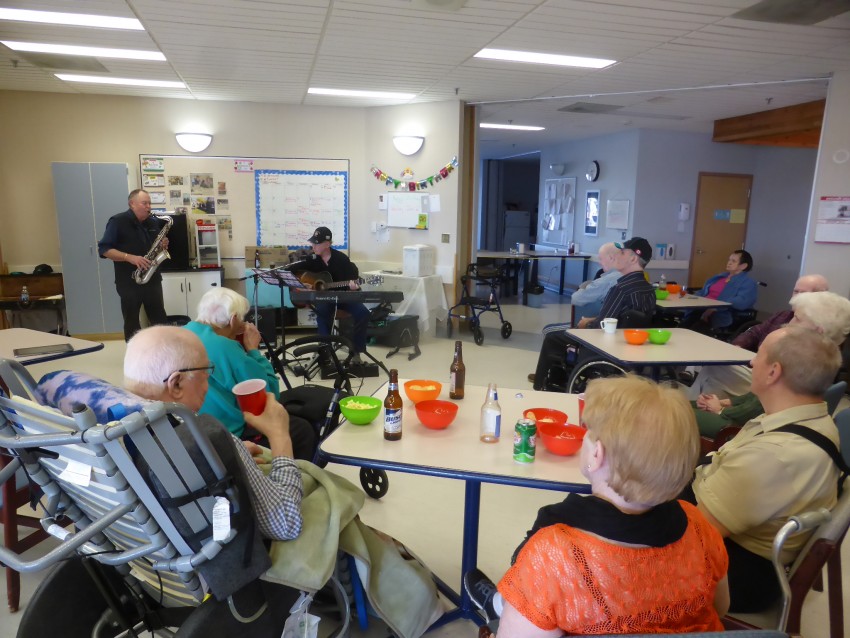 My father was hanging out with me in the basement, and then he began getting his band equipment together to haul upstairs to load into the car.  He told me that he had a gig to play at the senior citizens’ home in Coronach, the next town over.  My father is a very youthful 78-years-of-age.  I asked him if he needed a roadie for making music.  He was happy to have another set of hands to carry equipment, so I decided that I would join him for his performance.  Once we got everything into the car, we had a quick sandwich in the house.  As we were about to run out the door one of my brothers called.  I knew we were short on time but my dad was too polite to say so and he talked to my brother as I watched the anxiousness build up in him as time was ticking by.  Eventually, dad got off the phone and we jumped in the car to race the ordinary 15 minute drive from the ranch to town.

I had gone into an old folks’ home with dad a couple of years prior to take a chair to one of his friends.  I was horrified.  It was an eye opener as I found many of the people inside of the home were actually already dead with their heads hanging, but they were still using oxygen.  It was absolutely terrifying to see.  I hope my parents never end up in there.  I hope I never end up in there.  As dad and I were driving to town I told him that I was not sure what I was getting into and that I was nervous about going with him to see the insides of one of those buildings again.  Dad told me, “Oh don’t worry.  We are just going to the Coronach old folks’ home.  Bengough is the bad one.  That one’s the end of the line.”  Dad was speeding as we headed towards town.  He said, “We are late.  Those old people are going to be chewing their fingernails…”  I said, “Yeah, with their gums.”   That made him laugh and seemed to break his punctual anxiety.

As we pulled up in front of the building, Bill, dad’s saxophone playing friend was waiting for us in the parking lot.  We shook hands and carried the equipment into the senior citizens’ home.  There were many people inside, happy to see me, who knew me as a child that I had not seen in a couple of decades.  Dad was also happy by having my help for lugging in the band equipment.  I noticed the calendar behind where my father was setting up his keyboard, guitar and microphone showed today’s date and ‘Pub Day’ clearly marked on the calendar.  I found out that on the last Friday of every month my dad plays a gig at the old folks’ home and on that day they bring out alcohol for the tenants.  I am not even kidding.  It is the party of the month for them: music, dancing and booze.  It is the day they certainly look forward to every month.  Party time for people who have not partied in decades!

Once all of the band equipment was set up, the nurse on duty came around with the booze cart: beer, whiskey and vodka.  The entire community in the old folks’ home was sitting in a semi-circle, some in wheel-chairs.  Many people had a drink, and some had two.  A 99-year-old man was sitting beside me with a hose running down his leg from a catheter attached to him and a urine bag attached to the other end of the hose was hanging from his walker.  He too was enjoying a beer as my father began to play and sing old-time music for everyone.  Dad was making music by playing the guitar in his hands while his keyboard kept the tempo, below which he used its foot controls to change the chords of the keyboard while he sang songs and Bill who turns 80 in May, made fill-ins with his saxophone.

My father is an excellent entertainer and a very talented man.  As previously mentioned, he is 78-years-old himself, and some of the tenants in the home are actually younger than he is, so it was quite a strange scene for me.  The music was great and his banter between songs was better – “I’m not sure what the name of that song is, it came along before me, and that is hard to imagine.  If you are wondering who my long haired roadie is, that is my son Stephen.”  When dad would play music, those that were able to walk would dance.  Some of those who could not walk would stand in front of their wheel-chairs wanting to dance and the head-nurse would hold their hands and dance around them.  Those that could not stand were snapping their fingers.  At one point while dad was playing, I looked around the semi-circle and every person in the room was tapping something, sometimes only their fingers on the table, to the beat.  The 99-year-old gentleman drinking beer next to me was tapping his foot on the floor to the music and his foot was tapping on his catheter hose below.  There were smiles as powerful as sunshine in the room.  Everyone was very happy to have the entertainment.

Dad was scheduled to play music from 1:30pm until 3pm.  At 2:55pm he asked the crowd for the time.  And old classmate of my father’s from over 70 years ago said, “Oh Milson, it is only 2pm.  Plenty of time left.”  Those old people are crafty when they are enjoying themselves.  Everyone was in such high spirits in that room and I overheard people saying, “Oh, that is good music,” during breaks between songs.  Last call was announced by the head nurse and my father looked his crowd and said, “Oh, I hope it is not last call.”  He is very cheeky.  I am not sure how he meant to imply what he had said, and that is the genius of what makes him so entertaining and wonderful.  The head-nurse brought him a vodka and coke.

Sometime around 3:15pm, my father finished making music and entertaining for the day.  Everyone in the room thoroughly enjoyed the day, and the Old Folks’ Home Party this month was a success of very happy people.  As he had been playing, the head-nurse passed around a ‘Thank You’ card that was signed by all who could still use a pen.  When they handed it to my father and told him how great of an afternoon it was he said, “Well thank you.  Here I had thought you were just being polite.”

We packed up the equipment and loaded it into the car as the senior citizens’ home tenants headed for naps.  Dad wanted to buy Bill a beer for helping out and then we headed home.  My father and I spoke of age on the way back to the ranch.  He said, “Yep, as you age, time speeds up and the car slows down.”

*Stephen Harris was a farm-boy/cattle rancher from Big Beaver, Saskatchewan, Canada.  He is now a freestyle journalist, a rock and roll ambassador, a travel-holic, and a good time always happening who lives every day like it might be his 3rd last.  He is also the proud voice behind www.bigbeaverdiaries.com.

“We all three climbed into the old Land-Rover modified into a tow-truck.  We had to stop for fuel on the way.  The gas tank had been modified under the seat in a way that to fuel up, the driver’s seat had to be removed from the process.  This was not a problem because it was not attached to anything in the vehicle anyhow.  Then I noticed that when we went to start the truck to get on the road again, Kelvin just took two wires that were sticking through the dash, touched them together, the starter activated and the truck fired up.  We headed out of the city.  I was in the middle between Kelvin and Victor.  Neither door of the truck latched closed.  Who needs that anyhow?”
— Kenya Tow-Truckin'
[View All]