Masaka to Kigali: Hotel des Mille Collines.
Jan 28
I need to get to Rwanda before I get too deep into Uganda, so I got up early and caught a bus from Masaka, Uganda to Kigali, Rwandan for $11.50.  The bus that came that hour was one for a company called Jaguar.  Every hour a different bus comes through town, usually for a different company.  They all cost the same price.  I found a place beside a Rwandan girl, who was against the window, so I got the aisle seat.

Well, the bus was not the one I wanted at all.  It had the same final destination, but rather than travel down the highway to get to Kigali in six hours, it took rough back roads and dirt roads through small out-of-the-way villages and the trip turned into an 11 hour trip.  Yay…

The bus was a typical Greyhound sized bus full of people and our driver would stop along the way on the side of the road to chat with friends.  Then, in the villages, even though the bus was full, he would pick up more people and they kept on squeezing them in.  I spent about 2/3 of the journey with one person or another’s ass on my shoulder because they were standing in the aisle for the trip.  I was the only Caucasian on the bus.

Along the way, we picked up some kind of salesman who stood next to me and yelled his pitch about a product similar to Tiger Balm for about 15 minutes.  It was right in my ear and I was becoming very miserable.  When a bus attendant came around to check tickets, I asked him if he could tell the salesman to shut up.  He said the salesman was a part of the journey.  I asked him to ask the salesman if he would shut up if I gave him money.  The bus attendant translated this to the salesman for me.  Everyone enjoyed that, but I was not trying to be funny.  I was tired of the yelling.  The salesman said in English that he would be getting off soon.  It was a lie, and the pitch went on for toothpaste and other products. It took another 45 minutes to get rid of him.  My negative energy made him very uncomfortable. 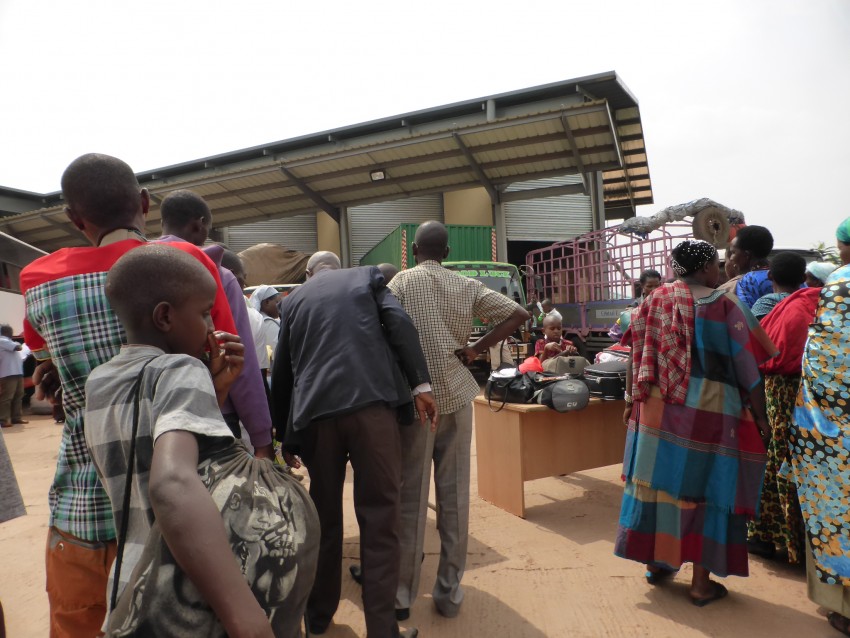 It took six hours to make what should have been a two hour trip to the Uganda/Rwanda border through a small border close to Tanzania.  Immigration could not have been nicer or more welcoming.  After we passed through, the bus had to unload everything from it and officers searched boxes and bags.  We got back on the road and five hours later we reached Kigali.  I got off the bus at the busiest station in the busiest city in Rwanda and no one came to hassle me.  Whoa!  Kigali looks nothing like the other African cities I have been to in Tanzania and Uganda.  Kigali is shiny and clean with modern luxurious buildings in the center of the city.  It looks like it could be a place in Europe. 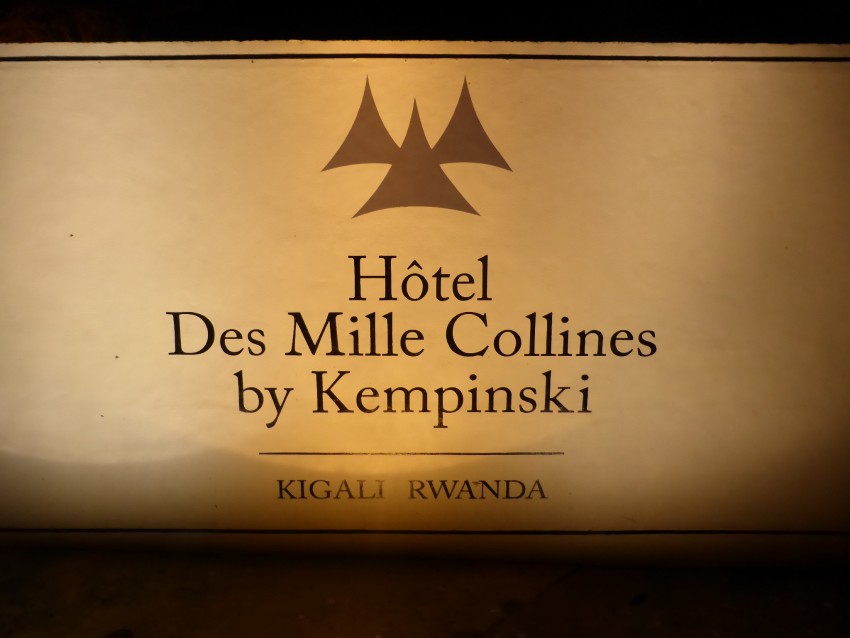 Hotel des Mille Collines, famous for its then manager, Paul Rusesabagina, hosting and hiding Tutsi peoples from the Hutu’s during the 1994 genocide.

I asked a motorcycle driver to take me to a guesthouse I knew of and he asked for the correct price that locals on the bus told me the ride should cost.  I checked into a pricey, but cheapest in central Kilgali, $20 guesthouse and caught another motorcycle taxi to Hotel Des Mille Collines.  The hotel is famous for its then manager, Paul Rusesabagina, hosting and hiding Tutsi people from the Hutus during the 1994 genocide.  It was also made famous by the movie Hotel Rwanda.  I wanted to go there for a drink to see if I could feel the building.

As I went to enter, there was an airport metal detector maintained by a male and female security guard at the front door.  I went to empty my pockets into a tray for them and when I did the man asked me, “What is this?” pointing to my jackknife.  I said, “Ooh, I bet you don’t like that….  No worries, I can leave it with you and get it later.”  I cleared through the machine and went to collect my things from the tray.  He smiled and said he would hold onto the knife.  I told him, “Be careful.  It is sharp!”  He liked me.

Hotel Des Mille Collines is rich luxury, the kind I seldom experience.  I took a few photos of the building and the outside bar, but the building is too polished and pristine to give any vibrations of dark times from the genocide of 1994.  One would never know how wonderful this building was at that time and what it did to save several hundred people.  At a glance walk-through, I could not notice any markers or evidence of the past.  The hotel was full of Caucasians at tables, the most I have seen in one place for a long time, so I went to the bar where many pretty African women were seated here and there. 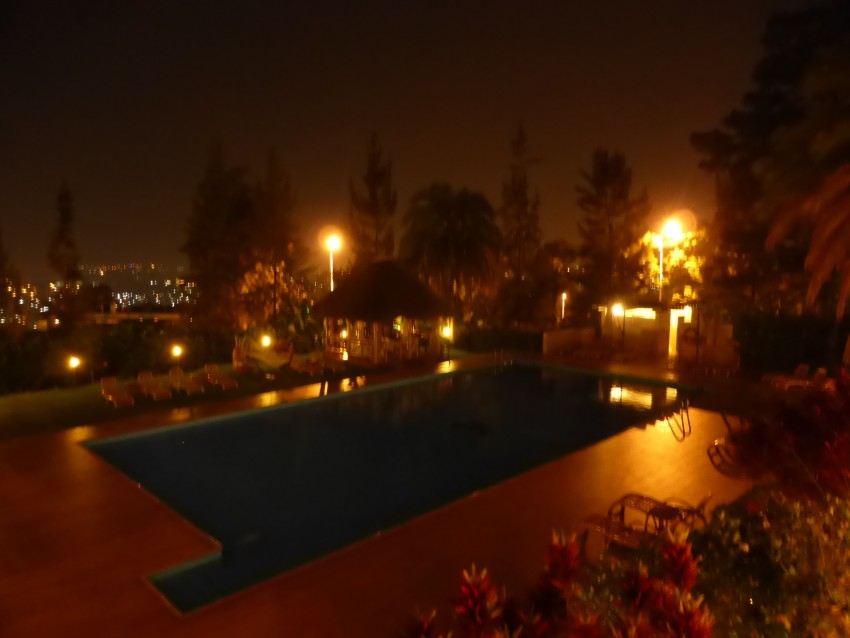 I ordered at the bar and two very pretty women started to chat me up.  I sort of befriended one of them.  She gave me her phone number so that I can see her part of the city tomorrow.  I began to wonder, “Wait a minute, there are a lot of pretty local women around this bar…”

Another gorgeous lady stops beside me and then leaves again, as soon as she realized I am talking to another girl.  All of the women seem to be without men or boyfriends and that many attractive women alone usually means…Oh oh…  I wanted to confirm what I had just come to expect.  I asked the girl chatting with me what she does for work to test her whorism.  She told me that she was studying, but ran out of money, and now she does not have a job.  Yes she actually does.  She has a job…

She had confirmed what I thought…  I was surrounded by whores.  Great…

I just wanted to feel the building, but I was surrounded by women who wanted to feel me for a price.  The prostitute chatting me up had her phone in her hands so I asked her for the WiFi password.  When she gave it to me, I buried my eyes in my phone to hide from the whores and to be unsocial.  They terrify me.  I lived in Amsterdam for nine months, right in the red-light district.  From my time trying to make friends with a prostitute that I could just go out for lunch with, I found that they are soul-less women, who actually despise men for what men do to them for what they are selling.  I do not trust them as people and I feel that they are very unsafe, in all uses of that word.

After about 10 minutes of my focus on the screen of my phone, the girl chatting me up said to me, “Wow, busy guy!”  “Yep, I am a busy man.”  When I looked up, I realized she had moved her chair closer to mine.  I decided to finish my beer and get out of there.  As I was leaving Hotel des Mille Collines, all of the whores were in agreement that they loved my hair.  I politely said goodnight and made my way to the front door of the hotel.  As I went to collect my knife from security at the front, I asked the guy, “Are all of the girls around the bar prostitutes?” 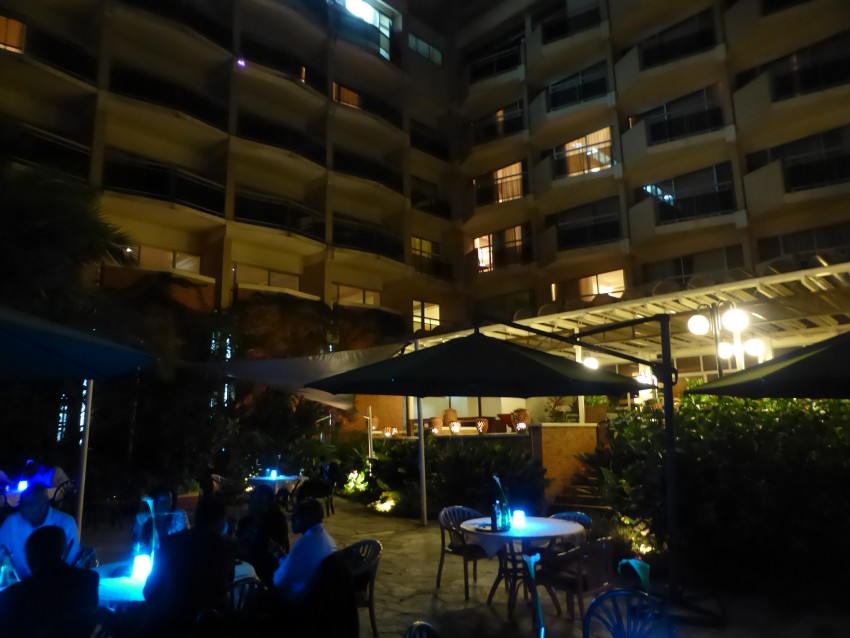 I walked back to my guesthouse since I sort of knew the way from the motorcycle ride on the way.  At one point, at a round-about, I was not 100% certain which turn I was supposed to take, so I approached a military man in camouflage who had a machine gun in his hand with his finger on the trigger.  There is a man just like him about every 50 meters in the city to keep the place safe.  He could not have had a bigger smile as he directed me to take my second right.  Thanks machine-gun guy.  I found my room where I checked-in for the night… 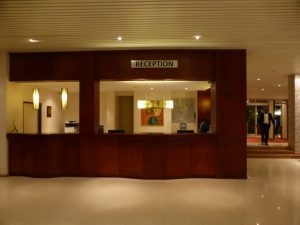 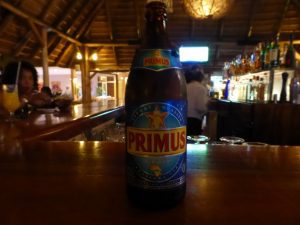 Where am I? This is not very African. Kigali is a different city…

“I walked down to the beach to see Lake Victoria and had a conversation with a German man who told me that the Ssese Islands have the highest rate of HIV of Africa at around 50% of the local population.  Whoa!  What?  Whoa! * What to not do in the Ssese Islands: Have sex…”
— Sesse Islands of Uganda
[View All]