Mexican Bullfight in Mexico City.
Dec 11
At 17:30 we headed to Plaza de Toros in Mexico City for the bullfight.  Plaza de Toros is the world’s largest bullring with seating for 41,262 gore fanatics.  I had been to a Mexican bullfight (‘Corridas de Toros’ in Spanish) once before in Mazatlan when I flew in for the millennium.  I said I would never attend one again, but it has been nearly 17 years and my friends Clint and Irmante have never previously been to the event.  It is horrible, but it is the culture here.

Walking up to the arena was great because there were so many vendor selling incredible things they have created.  Horse hoof ashtrays are pretty amazing.  So are cow hoof wine bottles… 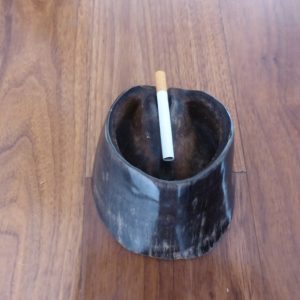 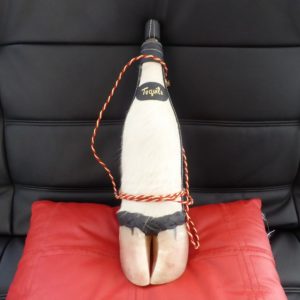 When we went to buy our tickets, the price range was from 250 pesos ($12.50) to 1000 pesos.  The lady behind the ticket window told us to just buy the cheap tickets and then move to better seats once the Mexican bullfight started.  Thanks awesome lady! 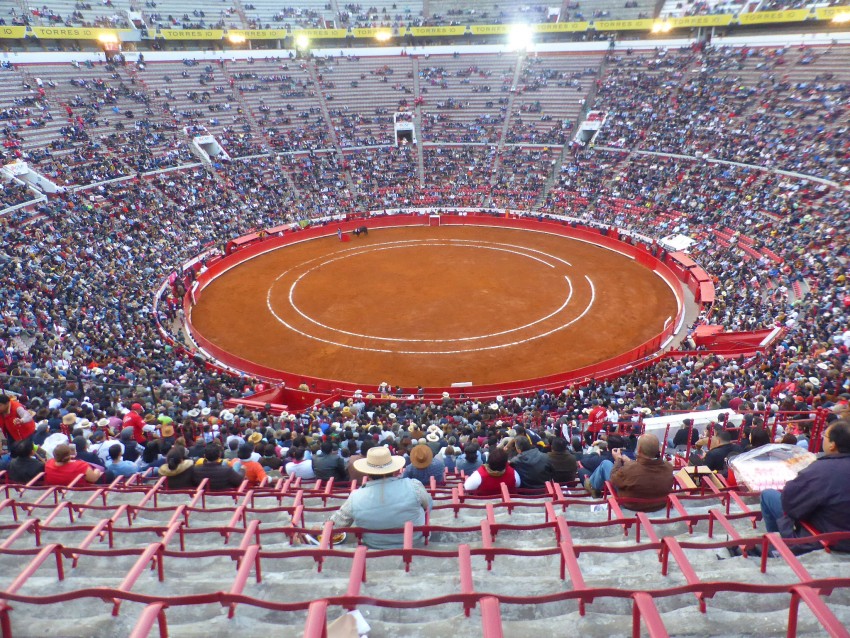 Two beer in a paper cup costs 100 pesos. Clint’s paper cup was dirty from having been used before. It had a red Clamato juice ring on the edge of the inside seal. Sexy…
The three of us sat in our cement seats high up in the steep arena and scouted far better empty seats seven rows from the actual ring.  We made that change in a hurry and claimed ‘our’ new seats, but I was a little sloppy and did not look at my ticket in front of everyone as I was about to take my seat to make it clear that it was probably mine.  Irmante and Clint made their change with a little more stealth.  I would realize the error in my ways when a security guard came up to us 30 minutes later and wanted to check our tickets.  I pretended that I had no idea what he was saying in Spanish.  A cigarette dispenser man who was selling us cigars to smoke with the beer we were drinking saved us by telling the security guard that we were alright.  I am not sure what the cost of our seats seven rows from the ring should have been, but I guess they were probably the $50 seats that we did not want to spend so much money on.

There were six fights and six bulls killed at the event.  It is amazing how it works psychologically to foreigners of the sport.  The first kill is terrible and you can not believe you are watching it happen.  You feel sick to your stomach and hate humanity for what we do to animals.  The second kill is pretty bad but it is easier.  The third you hardly even notice and by the forth, you are so involved that you find yourself cheering with the Mexican bullfight crowd.  It is a very strange sequence, emotionally. 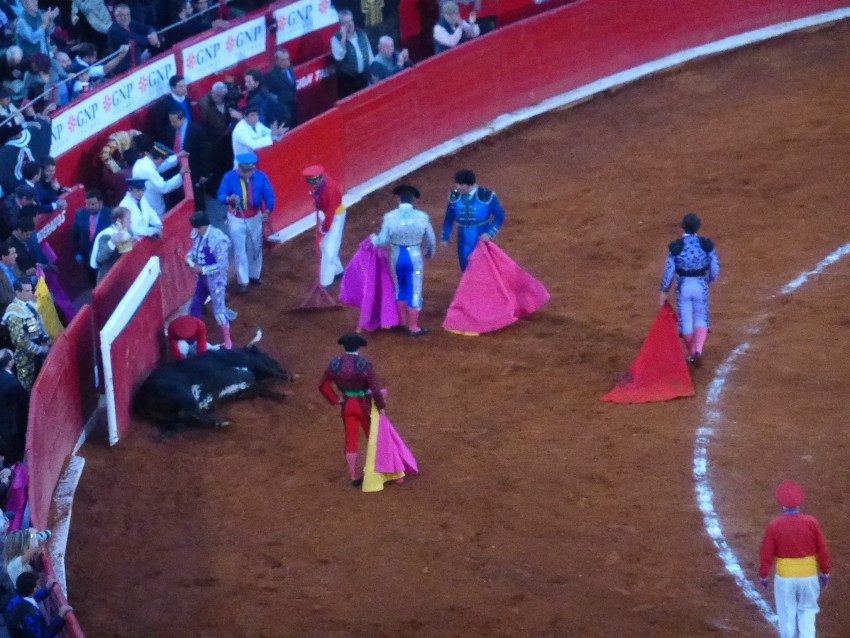 The third bull that came out was so scared during the fight the he kept on pissing through the entire clash until he was finally killed.
The bull comes out fast and hard.  A few matadors come out together and tire the bull somewhat before one matador takes control and conducts the actual fight with the bull.  It is not much of a fight as the bull does not stand a chance, but it sure is great when the matador gets knocked down.  I suppose everyone wants the underdog to win until the underdog actually does in really rare circumstances, a matador dies and everyone in the country mourns his loss.  It made me wonder how many hundreds or maybe thousands of bulls some of the elder matadors have killed in their careers. 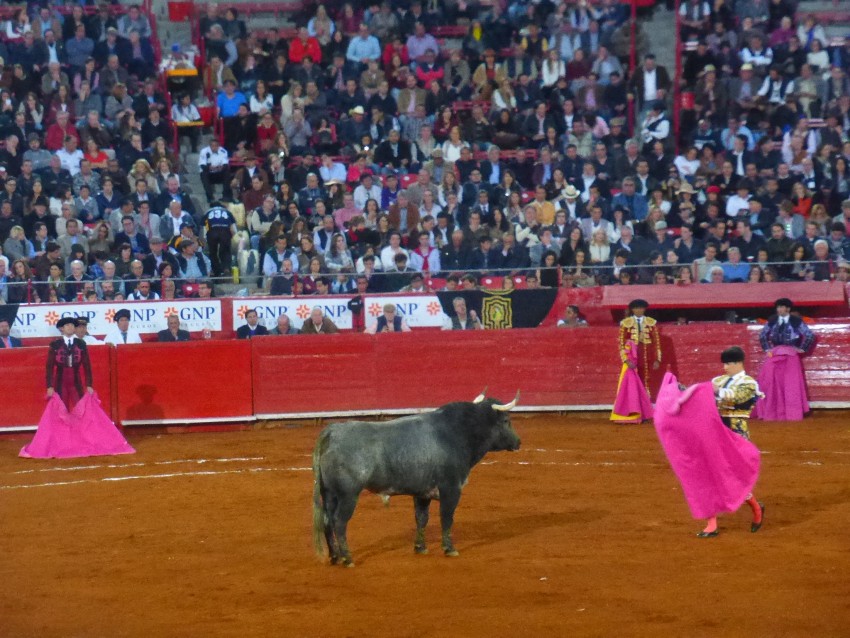 After the matador has tired the toro some more, two horse-mounted men carrying massive spears enter the ring.  The horses are covered in padding and blindfolded so that they cannot see to be afraid of the bull when it immediately charges at them.  As the bull rams the horse, the man on horseback stabs to drive the spear 20cm into the top of the shoulders of the bull in two separate places.  The bull does not seem to notice the stabbing at first as he is concentrating on his charge into the horse. 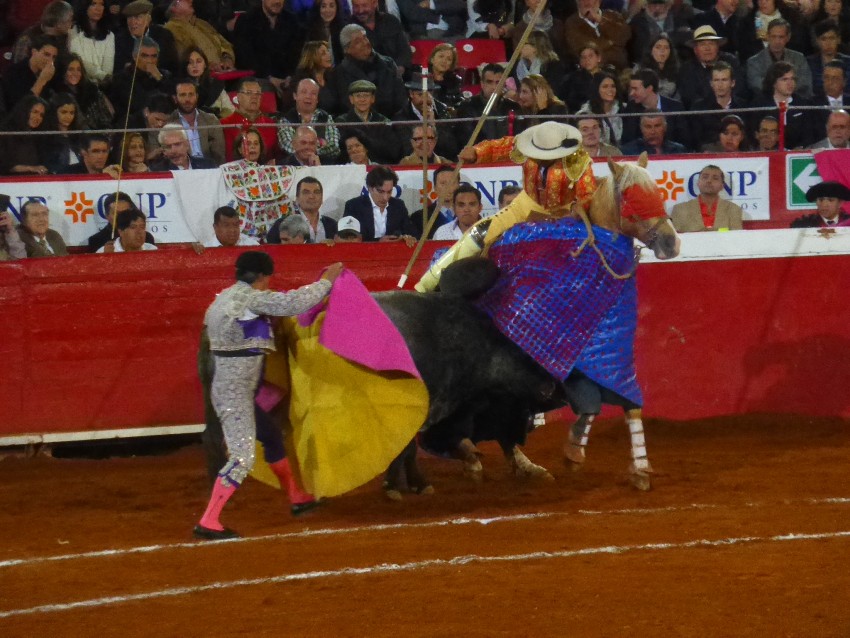 Stabbing the spear into the shoulders of the bull as the bull gets under the horse.

Two times out of six, the bull was able to get himself under the horse’s underbelly (also padded) to knock the horse and rider to the ground.  It is difficult for the horse to get back to his feet again after being knocked to his side because of all the armour/padding protection.  Two or three men are needed to get the horse back to its feet. 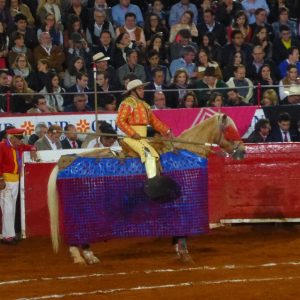 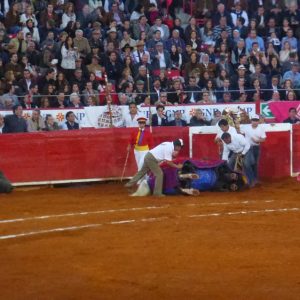 Horse tipped over by the toro.

Now that the bull has two massive punctures in his shoulders and his leaking blood covers his front legs, the matador runs past him and shoves poisonous darts into the wound.  It is awful.  The matador plays with the bull with his cape.  The entire crowd yells ‘Ole’ together as the bull runs at the cape. 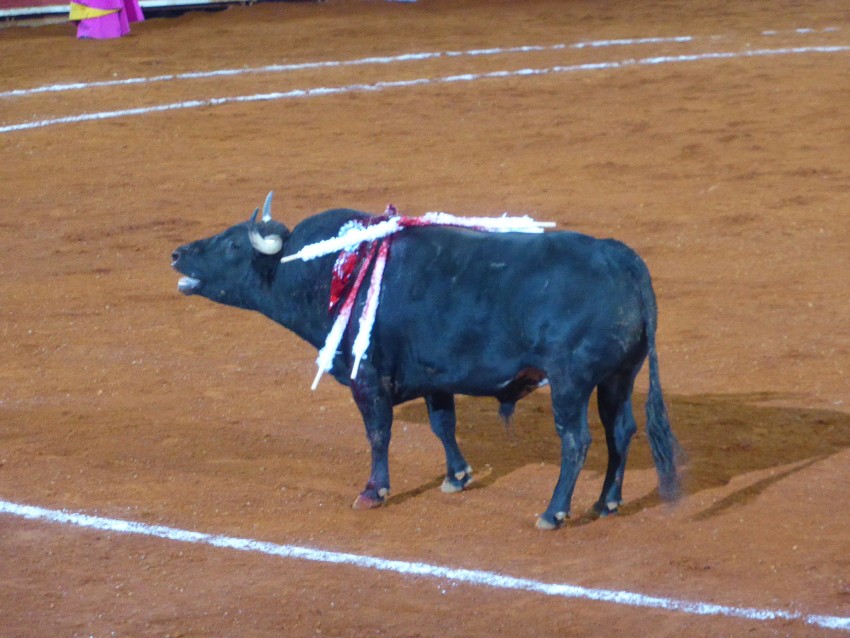 Once the dying bull is completely exhausted, the matador collects his sword from the side of the ring.

When the matador finds the right moment while tormenting the bull with the cape, the matador will run at the bull and stab the one-meter sword into the top of the bull’s shoulders, burying it to the hilt on the first try if gets it right.

The bull, having a one-meter sword inside of him is about to die and several matadors come out at that moment to confuse the dying bull until he falls down. 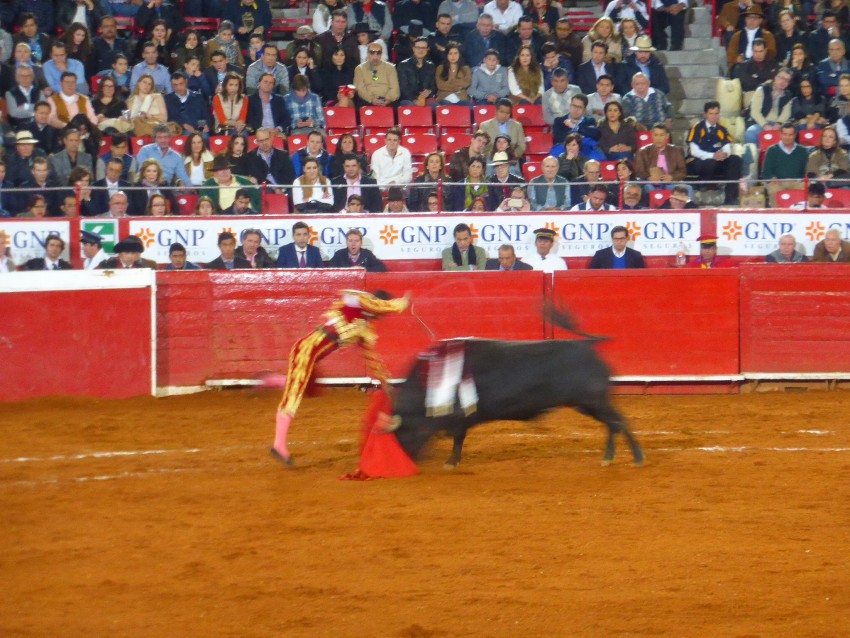 Once the bull is down, an older matador comes out with a knife that he shoves into the back of the bull’s brain through the back of his head and rotates the knife around until the bull stops moving.  Then a man comes out with a gorgeous team of horses.  Makeshift wooden-wheels are placed under the dead bull’s neck, and the team of horses drag the dead bull out of the arena, likely to the MacDonald’s meat plant.  Arena workers re-powder the lines on the grounds as others rake the blood into the ground while an entire orchestra performs songs.  Another bull is released into the arena and the whole process happens again. 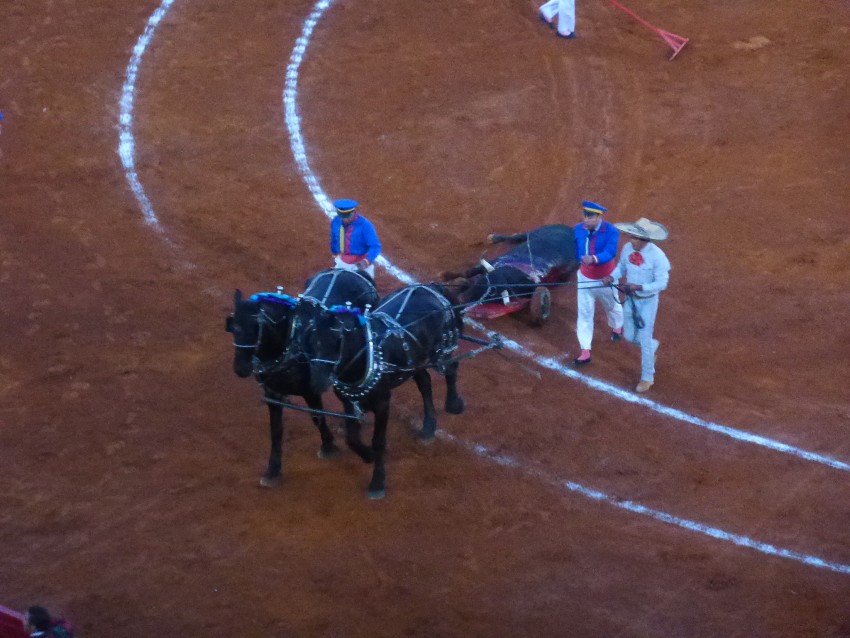 Wheeled out of the arena.

People were yelling rude things at the matadors when they were unhappy with the performance.

The acoustics of the Mexican bullfight arena are so good that one can hear the matador talking to the bull during the match.

You can hear individual voices from the other side of the 41,262 seat arena yelling at the matador and if you speak too loud to the person next to you the entire Mexican bullfight arena “SHHHHH’s!” you.  Drunk guys high in the stands were yelling, “One, two, three, four, kill the bull!” in Spanish in unison at the matador. 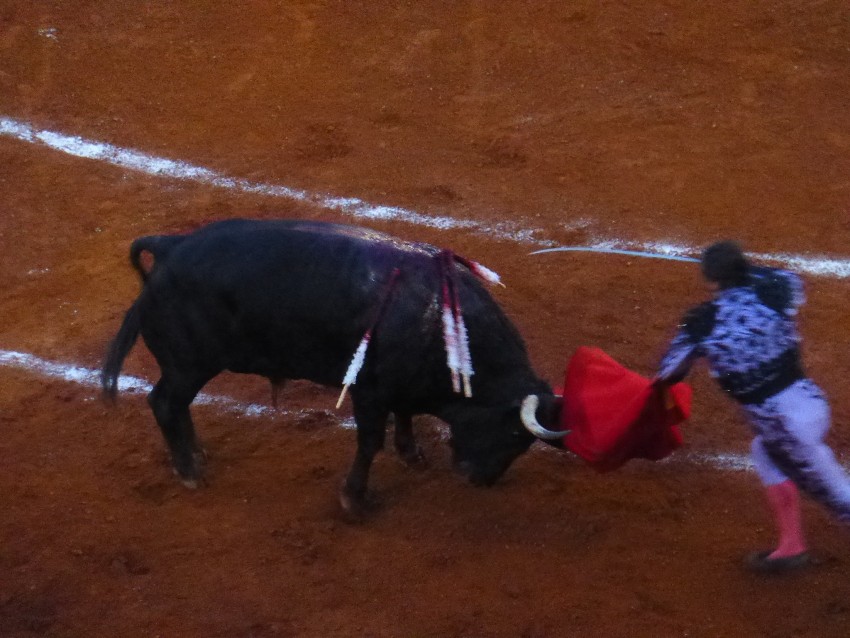 A fence separated the sides of the crowd in half.  When we looked around from where we were sitting in our affluent seats only seven rows from the ring, we were mostly among very light-skinned ‘white’ Mexicans.  It is interesting to see that there is such a social separation dynamic in Mexico and a division of wealth that seems to be affected by skin-tone.  I had been told of this before, but it was the first I really noticed the situation since arriving in this country. 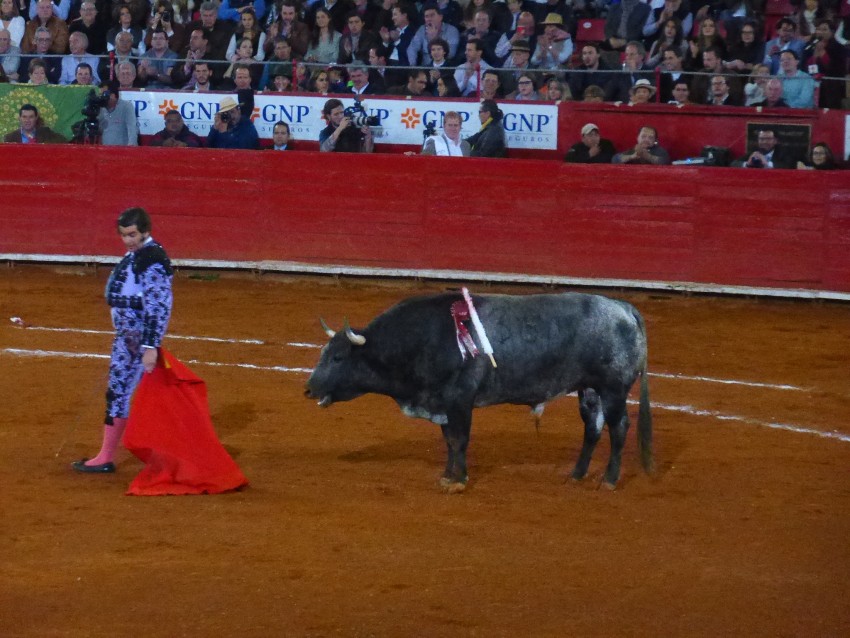 Matador, with his back to the toro.

The fifth matador did such an amazing job of killing the bull that he received a standing ovation from the Mexican bullfight crowd.  When it was time for the kill, he ran at the bull and buried the sword to the hilt in the bull’s shoulders on the first try.  The stabbing of the sword was so perfectly precise that the bull went down immediately and was dead in an instant with much less suffering.  The crowd rose to their feet in unison and even us three foreigners felt pride in the matador.

The fans were going crazy in the Mexican bullfight stadium to saluting the matador and waving white scarves.  It was almost majestic.  The fans were throwing their hats at the matador, which he would throw back to them from the arena ring.  The matador was throwing flowers at the fans.  People tossed traditional leather satchels of wine at him that he would drink from and then throw the satchels back.  Some fans ran down to the ring to touch the matador and he was kissing men on the foreheads.  It was incredible how the entire arena reacted to the matador.  My body was covered in goosebumps at the arena response. 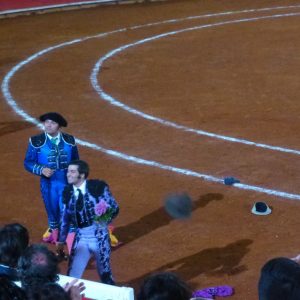 The matador being greatly honoured by the crowd. 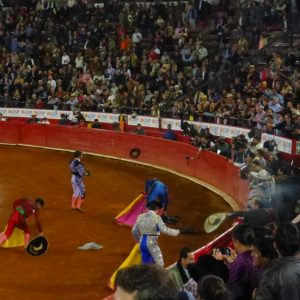 As we went to leave the stadium after the sixth fight was completed, the matador with the perfect kill was being carried out of the Mexican bullfight arena on the shoulders of the fans.  Incredible.

The matadors exiting the arena.

A Mexican bullfight is not for everyone, but there is no doubt that it is an intense event…

*The video of some of the fight.  Graphic… 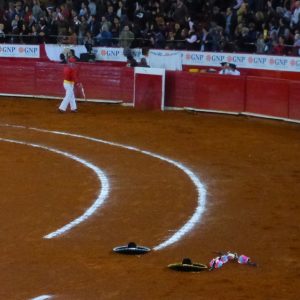 Hats to the arena as a sign of respect. 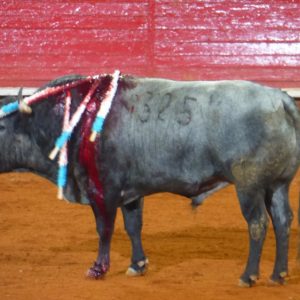 Nearly finished. Covered in blood. You can see his weight on the side of his body. 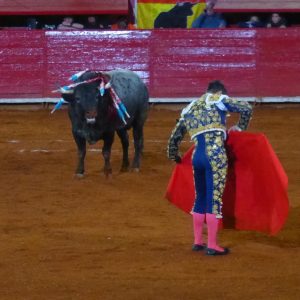 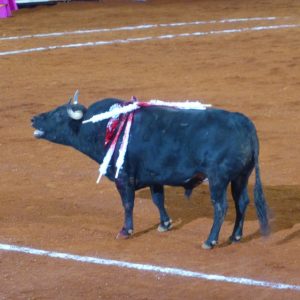 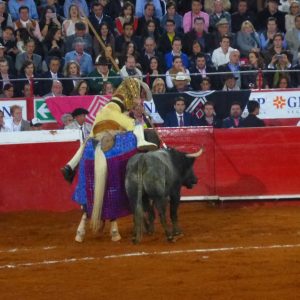 Stabbing a spear into the shoulders of the bull. 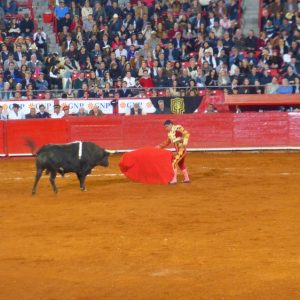 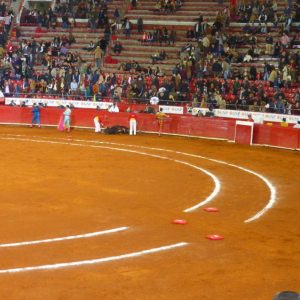 This was the last fight. It was a terrible kill which made the crowd angry. They threw their seat cushions into the ring in disgust. 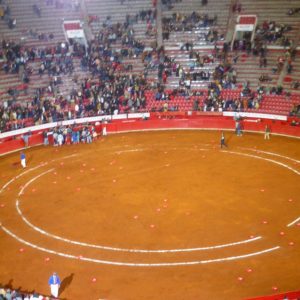 “'Prior Proper Planning Prevents Piss Poor Performance.' - Russell Neely (An older black man I met in New York in 2004)”
— The 7 P's of Life
[View All]