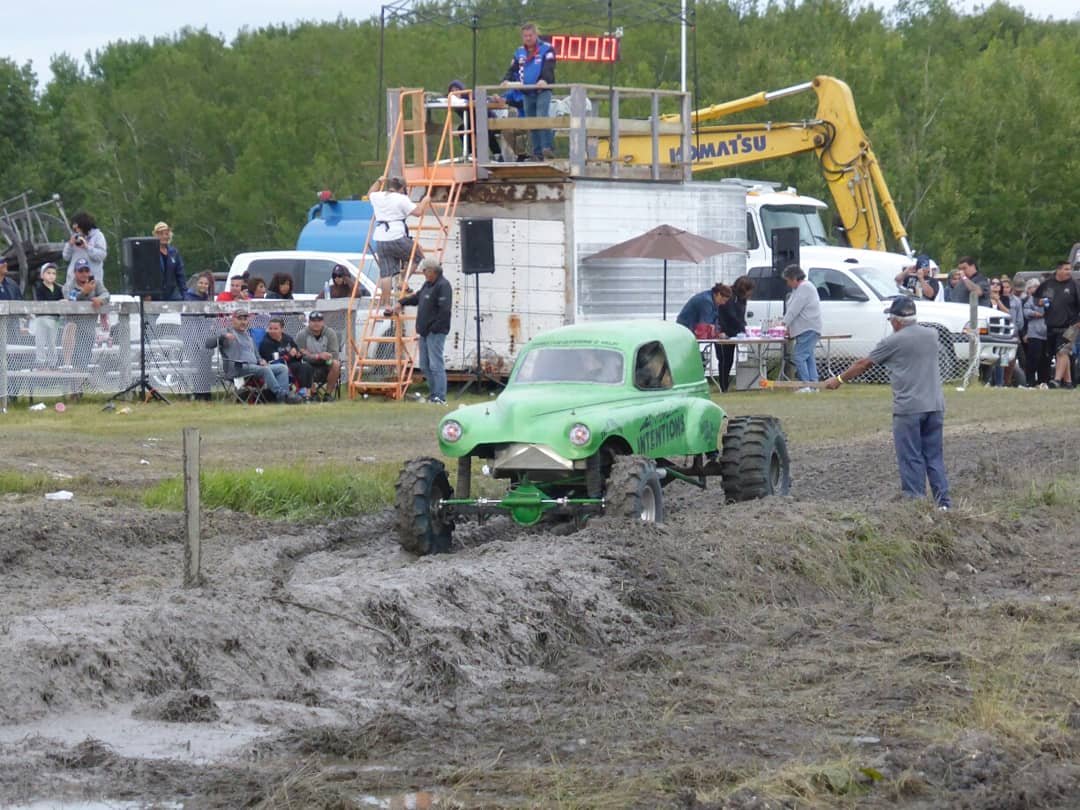 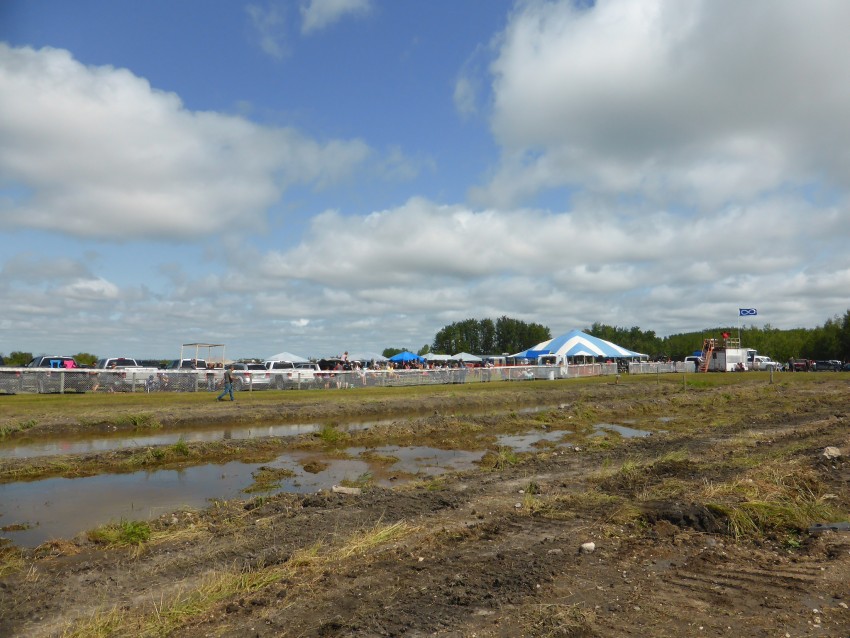 The calm before the storm!

Last night before Not Larry and I went into the dance at the Metis Festival in St. Laurent, Manitoba, Canada, we met an indigenous man named Hammi. It turns out that Hammi is short for Hamilton. Interesting. Hammi was telling us about the mud-bog that would be taking place today and how good it has been in the previous years. Not Larry and I decided to go to it.

Not Larry had never been to any red-neck truck activities before, so that sort of forced our hand to go to it. And I sure am happy that we did. She loved the crazy of it. 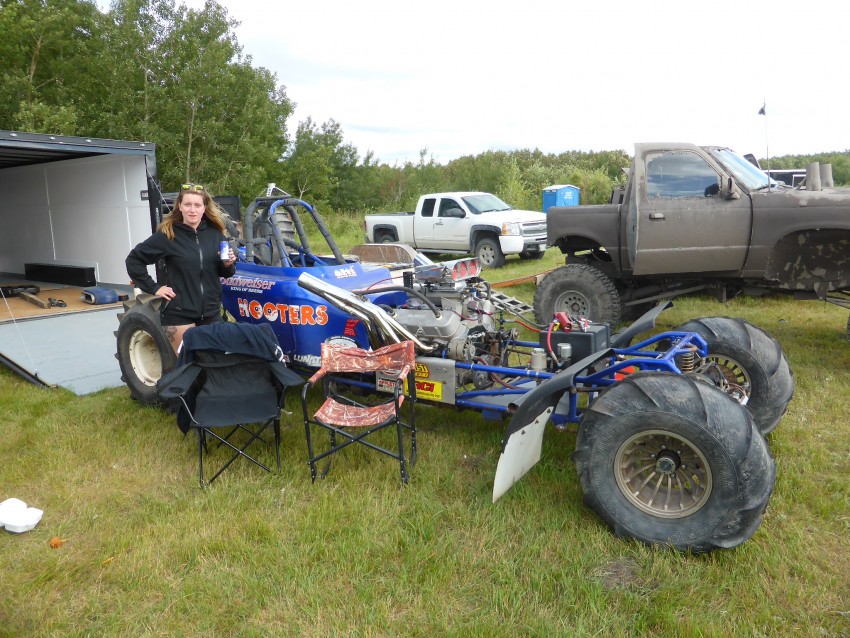 That is a rad machine! The car is cool too!

We made friends with Hammi’s friends who ran a food stand next to where the mud bog was taking place. They made us a breakfast and we sat down to talk to Hammi, who is retired. Hammi was running the deep-fryer. As he was chatting with us and told us in a very thick reservation accent, “I don’t wanna get married again. I want to stay single. The women…they take my money. The always clean me out.” The way he said that in his accent is one of my favorite things I have heard in a weeks.

At 13:00 the mud bog began and it was so great. Not Larry and I introduced ourselves to our neighbours as soon as we arrived, and that established relationships with them like we were old friends immediately.

The Metis people were so friendly. 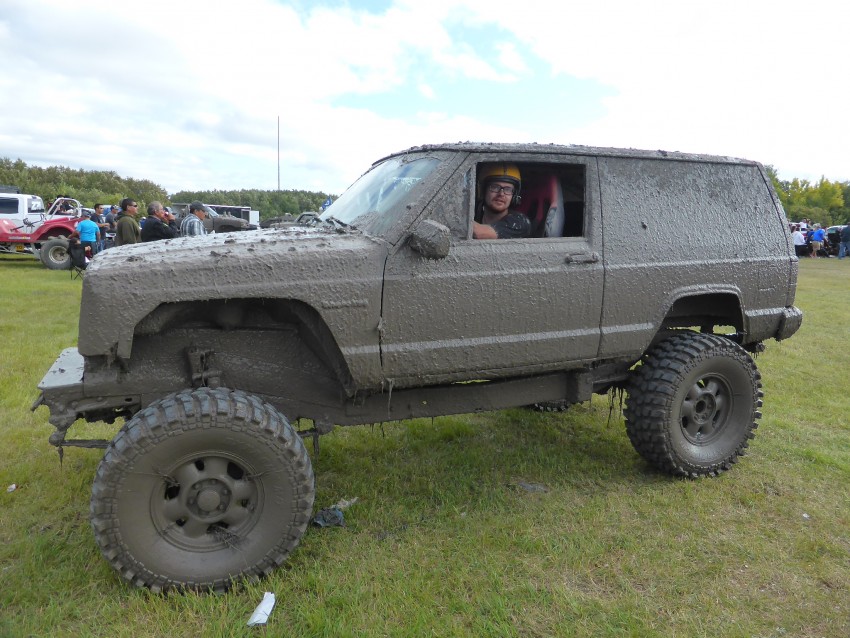 I wish he was taking this photo of me doing this instead!

The announcer on the microphone for the mud bog was a hilarious. He was Metis, and he made fun of being Metis and of made fun of being Indian all day long. Everyone loved him. The trucks for the mud-bog were modified and jacked up with bog tires. The announcer was making fun of the trucks as well. My favorite was when he was talking about a truck that was, “Right off the res. He’s got bologna skins on one side, and radials on the right.” Then he was making fun of a girl wearing a shirt that said ‘Dildo’ on it and he was then talking about pole dancing in the tent, hoping the doughnut-selling girls would make it happen. The man talked for about six hours straight as the announcer and it just seemed like he just made funny things out of nothing with verbal diarrhea. He was so entertaining. For the whole day, Not Larry and I would laugh together with the friends we had made around us as the announcer talked some nonsense about something and nothing! 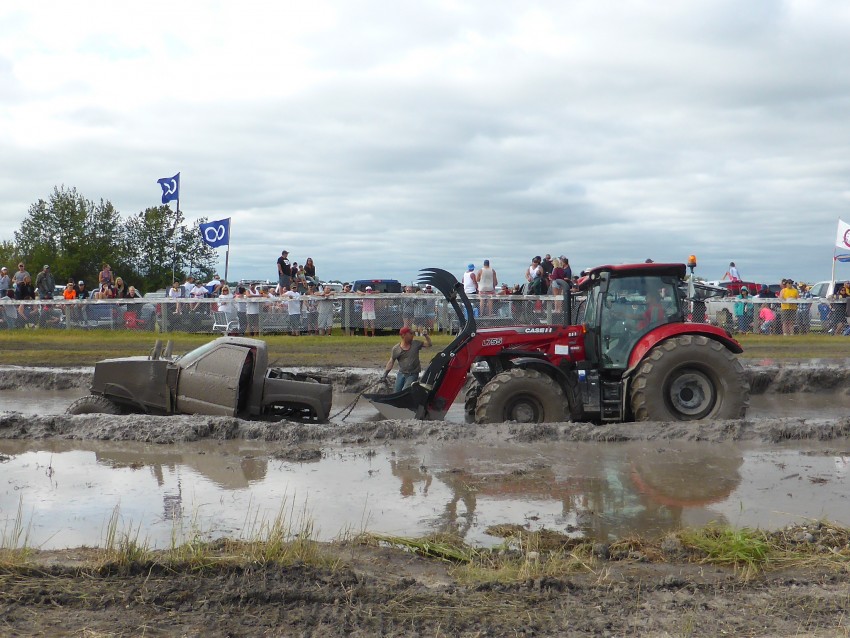 Pulling it!
Rear tire lost in the act!

It was so nice to be in St. Laurent.
The people were wonderful and the mud bog was so great.

We were getting splashed with mud from the awesome trucks from about 15 meters away. It was a lot of laughs, and I am so glad we went. The mud bog was raw and it was beautiful for it. There were no police. There seemed to be no medic. People were drinking beer everywhere. Passengers in the trucks in the mud-bog were drinking beer during the runs. We were allowed to be around the trucks. It was a really loose festival in uber-tight and regulated Canada so it felt like it was a breath of fresh air. The trucks were in classes of 33” tires all the way to 40” tires to a modified open class of vehicles with paddle-tires. Not Larry kept on looking at me, grinning with delight, asking, “Where…are…we?!” It was fun. 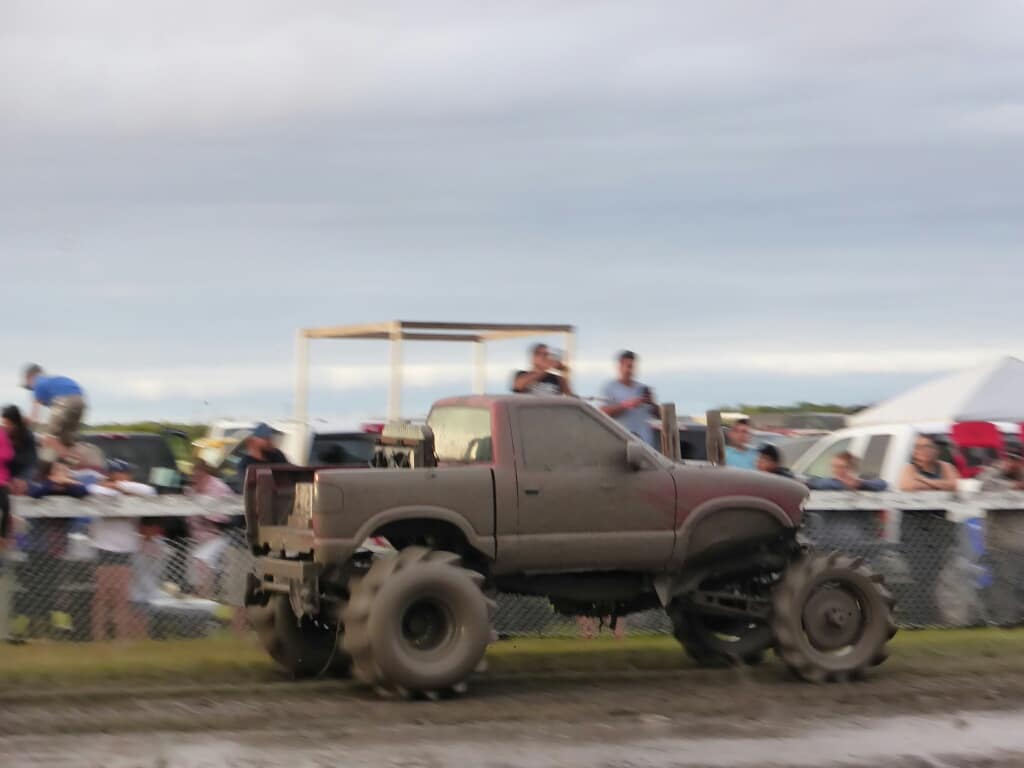 Someday, this will be high on my own agenda of as a Sunday drive.

After the mud bog was finished, Not Larry and I got in Vern the van and drove to two hours to Grand Beach where we drove in and slept next to the beach. Today was an awesome day.

One rad video of a super cool day, trucks in mud, and the human mud bog…it is all right here at your clicking fingertips!

“Julia was looking for her phone in her room.  When she was struggling to find it I asked her, “Do you want me to call it so that it rings?”  She said, “No, that will not work.  It is on loudless.”  Loudless!  Holy, that is cute!”
— Julia from Belarus
[View All]