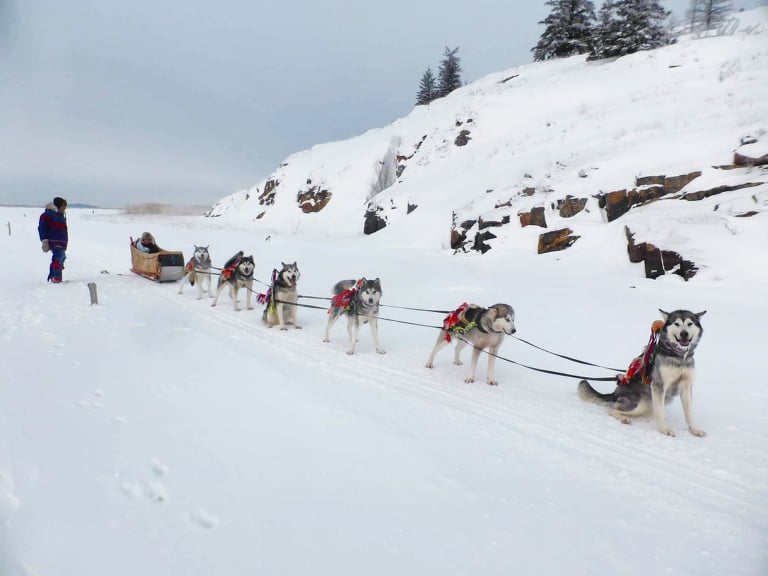 One time I was out trapping and I took my dog-team as I have a long ways to go. I leave here on a dog-sled with six dogs at 8 o’clock in the morning and I arrive at my trap-line at 8 o’clock at night. So the whole day’s gone just traveling one way. Now the next day I go to visit my traps. And as soon as I get on my trap-line, I know there’s wolves on there because already I’m starting to lose fur. I’ll go to a trap and something pulled a piece of fur out of there and ate it. And I know there’s wolves on my trail, so I keep going. I just keep checking my traps. I mean, you still have to go. You can’t, you know, turn back. So, I go right to the end of the line. I got one fisher out of that trip. I could tell the wolves were on the trap-line but the fisher was fresh, so they hadn’t been there yet. 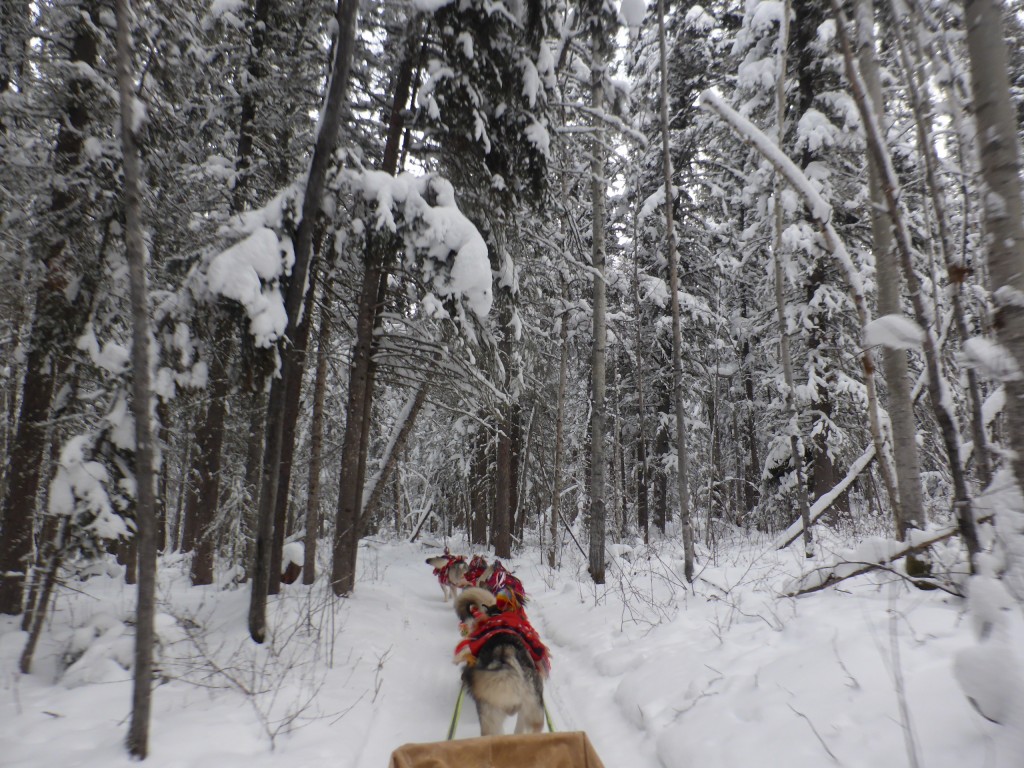 From the end of my line, I turn around and I’m coming back now. And all of a sudden my team leader stops. So I look at her and I make her go again. I ask her, “What the hell’s going on?” She goes again. Again she stops. Again I yell at her to go. I don’t know why, but I wasn’t thinking. I should have took note at what she was doing.

What had happened is that the wolves, when I went by, well they turned around and they came back on my trail. And there was a buffalo following my trail. So they were after that buffalo trying to kill it. When I came along they ran away. The buffalo now, after the wolves ran away, he saw my dogs and he charged my dogs. He came straight down the trail. That’s why my leader was trying to stop because she knew that buffalo was there. But I kept making her go. And I come around the corner and it’s too late…there he is charging at us at about 30 mph. Fast. I just barely had time to jump out.

I jumped off the trail and he ran right by and stepped on one of the dogs. He didn’t hurt it too bad. He stepped on it, but then he jumped on my sleigh. He put a hole right through my sleigh and then crashed by. And then he stopped about 50 feet down the road. And oh my goodness, and here I am trying to straighten out the dogs because they’re all messed up and they have to be straightened out to pull because they’re all tangled and they can’t run. I jump back in the sleigh and I’m keeping an eye on this bison. Luckily he didn’t come back to attack us again. So I managed to get away anyway. But, the gun I had was only had a .22, because that’s my wildlife management: I won’t carry a rifle because if I carry a rifle and I see a moose I’m going to shoot it. And I then lose a whole day of trapping and I just harvest a moose I probably didn’t even need anyway. So my management was not to carry a rifle. I only had a .22 and what a mistake that was because after, when I got back from the trap-line, I told some elders about what had happened. They said, “You’re lucky because what usually happens is his horns get caught in the harness and then he’ll run away with your dogs. They get caught up in the harness.” Two or three people told me, “I’ve seen that. A guy’s dogs all got taken away. And then two days later he goes to find them, and they’re all dead. Because the buffalo killed them all.” They said, “You’re lucky. You’re really lucky.” 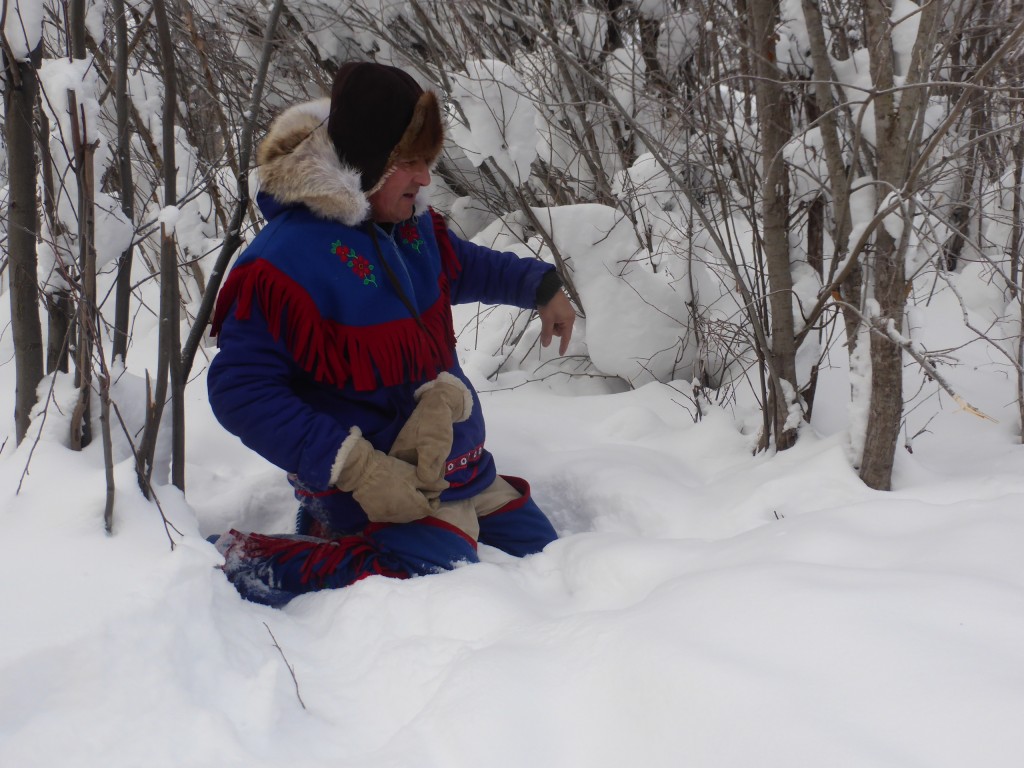 The next time I go check my trap-line about 4 days later, I used the Ski-Doo. At that point, I stopped taking my dogs because I’m the only one in Wood Buffalo National Park now with a dog-team. So when a buffalo sees my dogs, well instinctively he thinks it’s wolves. And I can’t shoot every buffalo I see. I can’t. It’s immoral. It’s not right. So I’ve had to stop taking my dogs through the park. And just for that reason, I use the Ski-Doo now.

I went back to that spot where the buffalo attacked my dogs, and my fur hat was laying on the ground. I didn’t even know I’d lost it then, I was so afraid. That was really foolish because I should have been carrying a rifle. But like I said it was my form of management. If I don’t have a rifle I can’t shoot a moose. But, a buffalo is a big animal, and they’re fast. Don’t kid yourself, they look slow, but they’re fast. 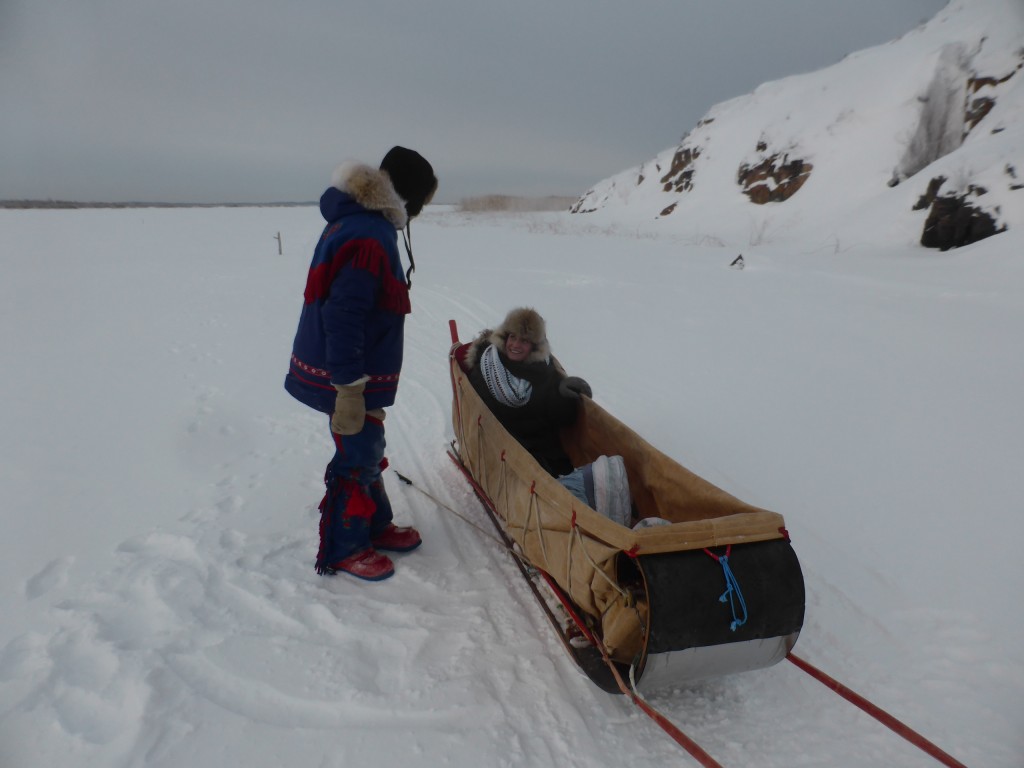 Some people ask me, was there prayer, or did my ancestors have prayer? I don’t think we had prayer. Because if you’re chasing a bison with a sharp stick…can you imagine how much work that took? You had no time for prayer, you were just scratching off the land. I think what they had was beliefs. And they had forms of respect. The reason I say that is because I still continue with it. One of the examples is the bell on the moose. That’s the piece of skin hanging underneath his chin. We always hang it up in a tree when we harvest a moose, just to say thank you and to show respect for its spirit. We never leave it for another animal to eat. It just shows respect for these animals. So we hang the bell. It’s the same as a black bear’s tail. You never feed it to dogs. You always hang it up and you hang it high enough so that an animal can’t get it. I always do it, and maybe it doesn’t even mean anything, but we do it just out of respect. 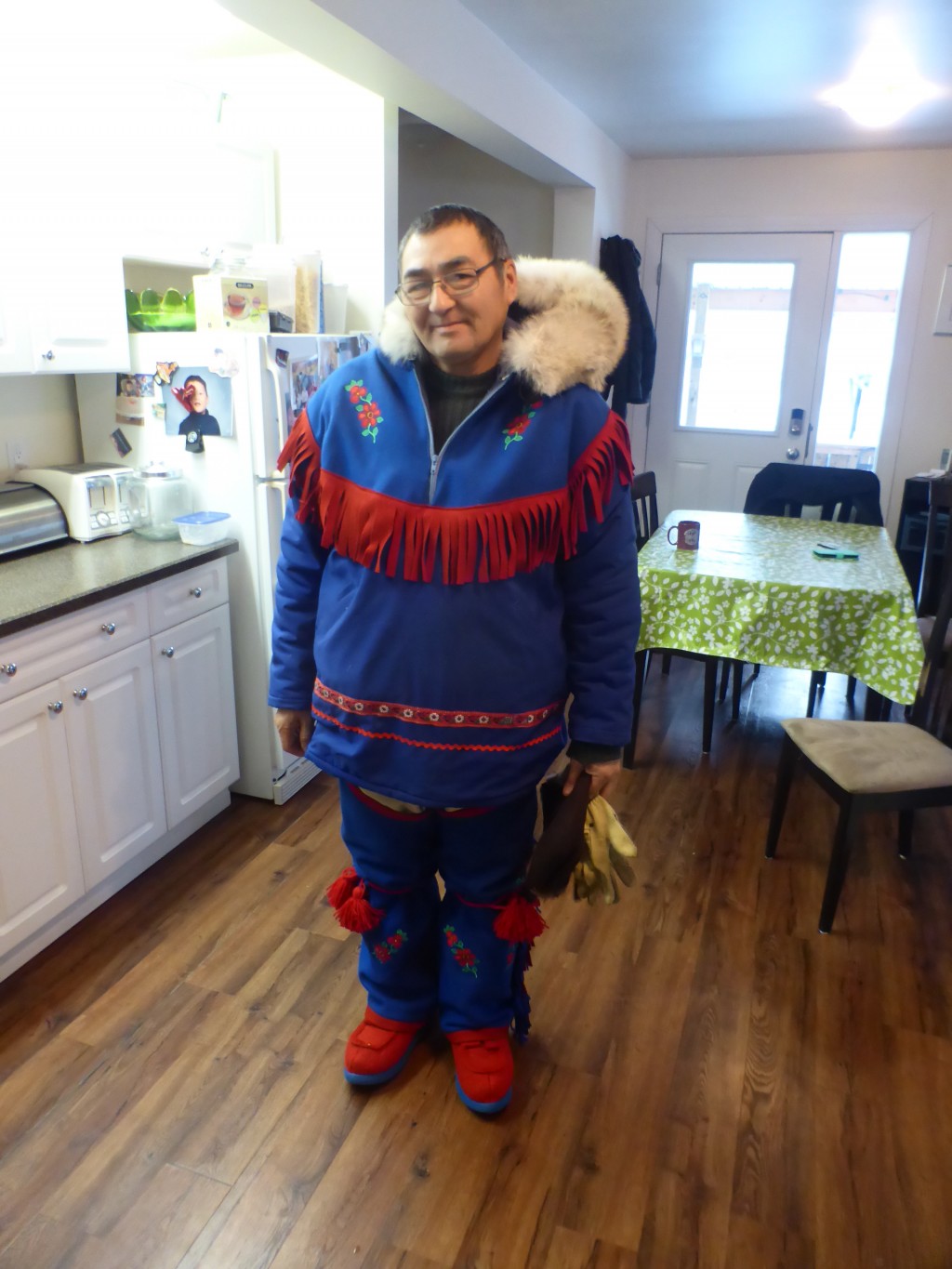 “Korean’s learning English chose an English name. I have decided to choose a Korean name. This is highly irregular. I wanted something cool and tough. I chose ‘Dol Sway’ as it means stone, but after I chose it I found out that it has a double meaning. ‘Dol Sway,’ aside from meaning stone, is also from a legend where a man named ‘Dol Sway’ was a servant who was also having an affair with some princess. Perfect. Nobody in Korea is named ‘Stone’. I shall have all of the Korean’s call me Dol Sway henceforth!”
— Dol Sway is in South Korea
[View All]