Rwanda to Uganda: From Gorillas to Potato Trucks

Rwanda to Uganda: From Gorillas to Potato Trucks.
Feb 8

Time to leave my wonderful little village of Kinigi. It is time to get out of Rwanda.  I had not ambition to leave the ‘Land of thousand hills and a million smiles,’ but I need to start making some miles and some dust.  Time for the move from Rwanda to Uganda.  I feel like I am going to cheat a lot of countries out of a lot of time, but there is just so much to see, and only so much money and need to get back to Europe well before summer.

Jackson and Theo came to meet me to say goodbye and then I got on a motorcycle to take me to the Dian Fossey Gorilla Fund International in Musanze to first see if there is a small chance that I could volunteer with them for a couple of months.  I can, however, in Rwanda ex-pats can not work in the field with the gorillas.  And the alternative of sitting in an office and punching numbers into a laptop about gorillas on behalf of the company does not seem to pack the same appeal.  With that plan out, I caught a bus for 25km from Rwanda to Uganda to the border for $0.15. 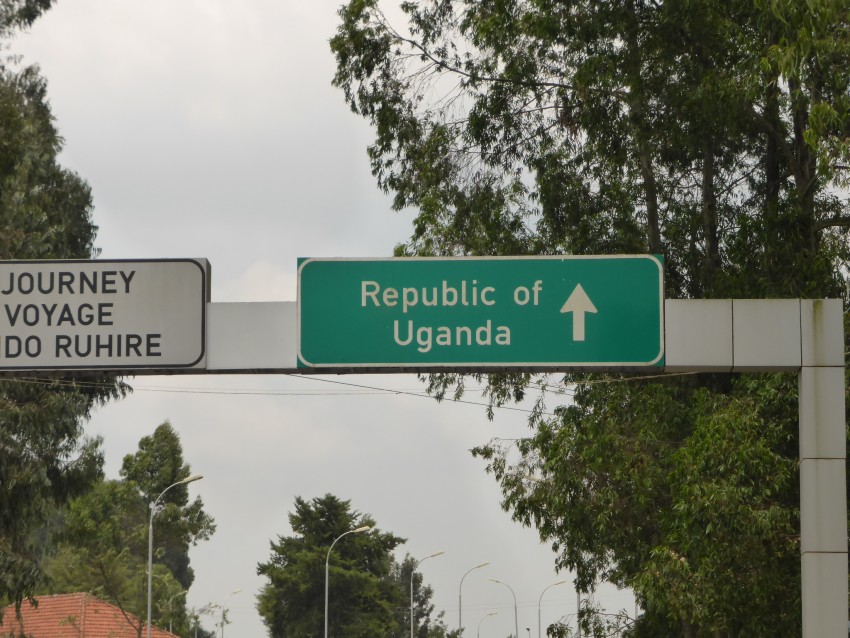 I made friends with a couple of travelers on the bus.  I was feeling conversational with other foreigners.  He, Sebastian, and she, Kate, are doctors in the UK who are in Africa for 10 days.  I did my best to convince them to go and see the gorillas while we were having lunch and a beer in a Ugandan border town called Kisoro.

There is a huge change in culture from Rwanda to Uganda.  Suddenly life seems to not have much value and no cars respect helmetless motorcycle drivers or pedestrians.

It made me realize how far Rwanda, a country that truly did not value human life not so long ago, has come along in the past 20 years basically starting again from nothing.  Here in Uganda, the people are much poorer, wear tattered clothes (something you would never see in Rwanda) and ask for money everywhere I walk.  A man interrupted me in the middle of a lunch conversation with Sebastian and Kate.  He was shouting ‘EXCUSE ME, EXCUSE ME’ to us as I was talking so that he could tell us his story of why he needed out money…  It is hard… 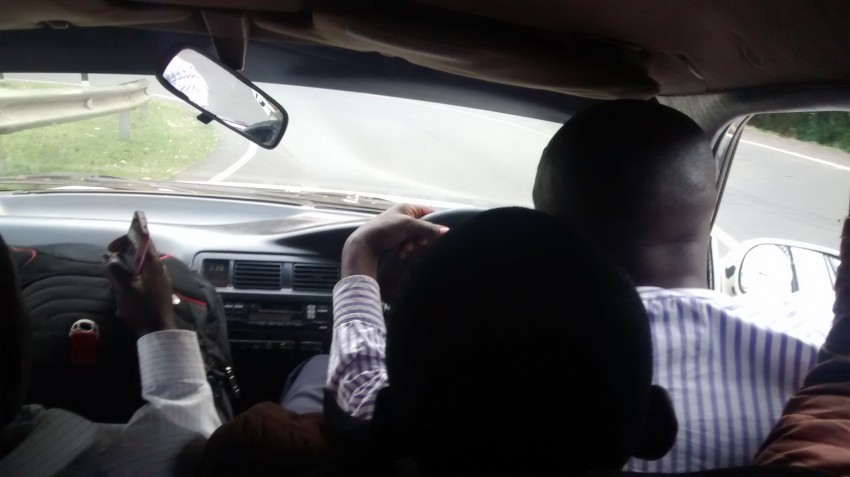 The guy closest to the camera is actually sitting in the driver’s seat as well. There are four on them squeezed in there…

I decided I did not want to be in a city, so when Kate, Sebastian and I parted, I got in a car with four people in the front and five of us in the back.  It cost me 10,000 Ugandan shillings ($2.90) for an hour long car ride from Kisoro to a place along the highway near Lake Bunyonyi.  When the driver dropped me off, he called a motorcycle taxi over who was nearly licking his lips looking at me, thinking about the money I probably had in my pocket.

I would need to travel an additional 7km down a gravel road to get to a guesthouse on the lake.  I asked the motorcycle how much he was going to charge me.  He told me he wanted 20,000 ($5.80).  I told him there was no way I was going to pay him double what my hour long car ride was for a 7km motorcycle ride with him.  (I would later find out that it should cost me 5000, which is $1.45)  I really hate it when people try to cheat me just because I am a foreigner, but I find it really awful when people aim so high in their chance to try to screw me out of money, that they would sooner make no money at all then make regular fare to do what they would normally do with anyone else.  I stubbornly walked down most of the 7km gravel road.  Another motorcycle driver tried give me a ride for crazy prices…  Nope…  Goodbye. 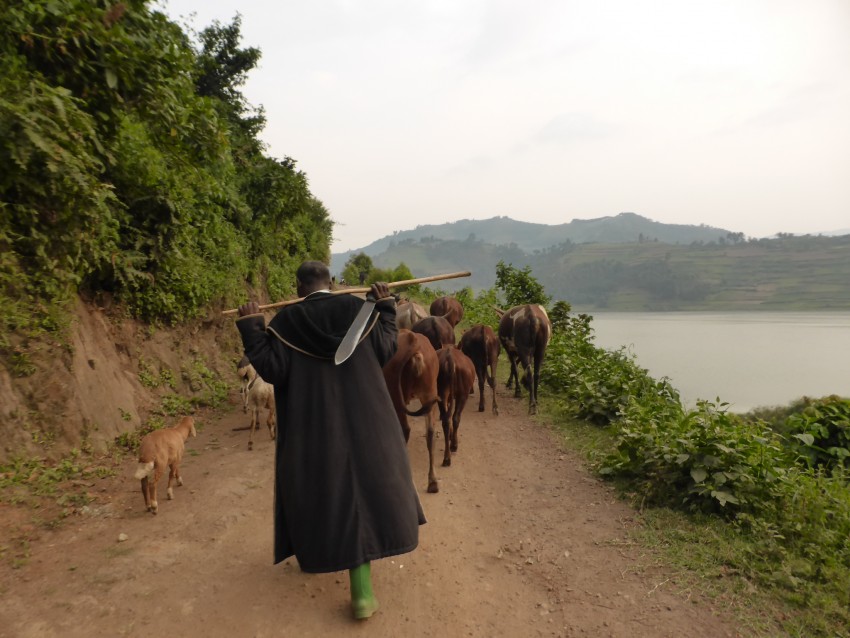 My photo of the day. The cows, the boots, the cloak, the herding stick, the machete.

Everyone I met on the road was asking me where I was going.  I really had no clue, and was just hoping to find a place to stay.  Somewhere.  Anywhere…

People kept on asking me if I was going to Wilfred’s?  Maybe…  I ended up in the back of truck catching a ride with a group of local people who were hauling potatoes.  There were about 12 of us in the back of the vehicle and again people were asking me if I was going to Wilfred’s.  “Possibly…”  The only problem with my ride in the potato truck was that they had to stop at a lot of houses to collect huge gunny sacks of potatoes and I realized that with the time it was taking, I could walk down the road faster.  So, I did… 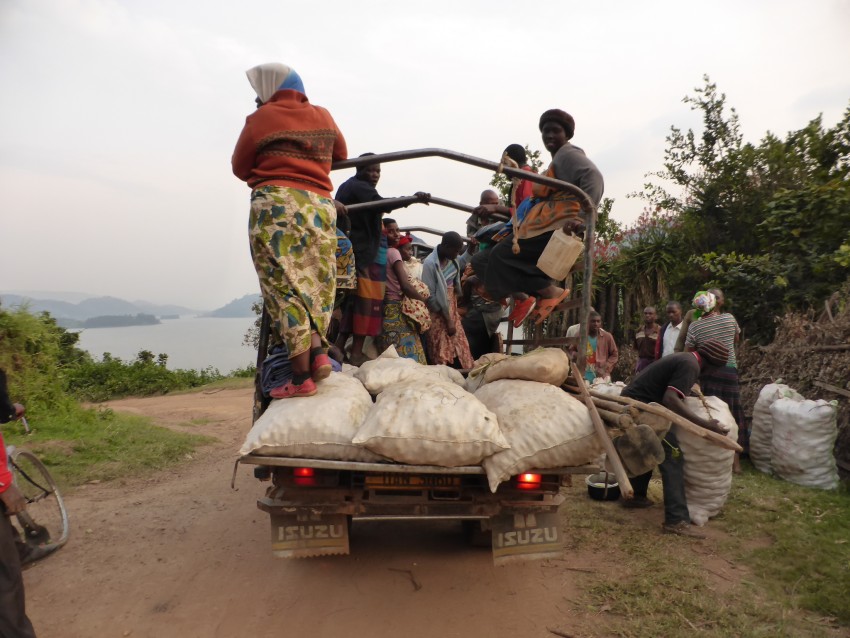 A group of 5 children walked with me for the remaining 2km to a village I could see on a hill.  The kids and I had English color quizzes on the way, me pointing at things and asking them the color.  It was fun.  We were meeting other people on the road, and by that point I had heard about ‘Wilfred’s’ about 5 times and just started responding that same name to everyone who asked where I was going.

As we got to the village, a man called me ‘Champion’ and I guessed it was he who had wanted too much for the motorcycle ride and was impressed that I had walked most of the journey.  Another local man chased away the kids who had been flanking me, assuming they were bothering me.  I had been glad to have them as they were showing me the way to where I had no clue where I was going.  Then, I had to start asking others in the village how to get to Wilfred’s.  It was dark-black-night by that point.

A man eventually lead me to where I wanted to be, though I had no idea where that was or what was going to be there when we arrived.

Wilfred’s place, officially named ‘Amasiko Eco-Farm’, was on a peninsula from the town and was the only place I came upon that had lights on.  I was very pleased to see that light when I finally did…  I entered the house and a Caucasian man had his back to me in an office.  A white guy?!  Without turning around, he told me and the gentleman who had walked me to the house that he was hunting for his glasses.  I could only see the back of him but said, “Whoa, you do not look anything like I was expecting!”

Wilfred, a Dutchman in his 50’s, turned to introduce himself to me.  He had accommodation!  Wonderful!  I needed it.  We discussed prices and he told me that he charges $30 for room and board.  It was out of my price range.  Then Wilfred mentioned that he is part of the ‘Workaway’ program.  I could pay the value of my food and maintenance here ($5), and give him four or five hours of work for the rest.  Deal! I told him I am a farm-kid and that I used to be handy.  He seemed to be glad to hear so.

Wilfred is a jolly man who shows you right away without showing you that he cares for people who come through his door.  I was just in time for dinner where he, three of his helpers, and a Russian volunteer named Maria were about to eat and said they had enough food for their surprise guest as well.  Great!  Dinner was fantastic.

After the meal, I was taken to a wonderful little personal cottage on the side of a hill overlooking the lake.  Rwanda to Uganda, completed.  Awesome!

Life is an adventure if you want it… 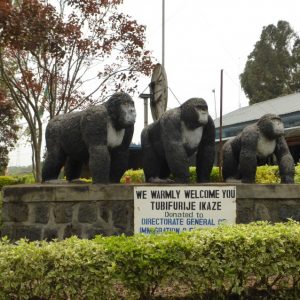 Yea, go and see them. They are awesome! 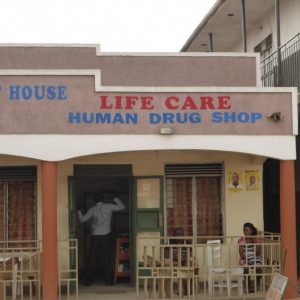 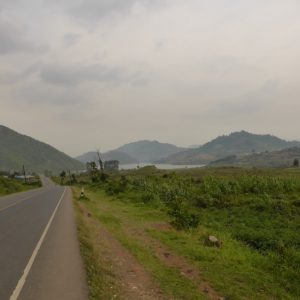 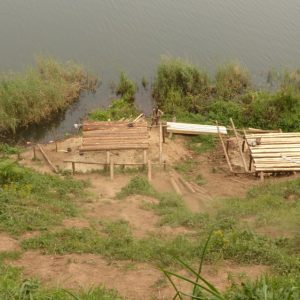 I helped the guy at the top push a long down a chute he had made to get it to his friend at the bottom. 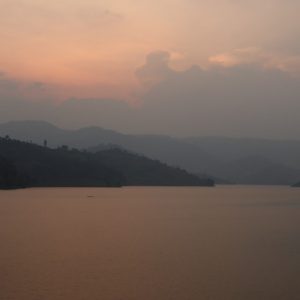 “Sometimes kids in Rwanda said “Ni Hao” in passing today, assuming that since I do not have dark African skin, I must be Chinese.”
— Children in Rwanda
[View All]