18 September
An amazingly cool thing happened today.  Well, it all goes back a couple of months.  Today ties to a day in late June when I was on Isla Floreana in the Galapagos.  I wrote this from that time…. 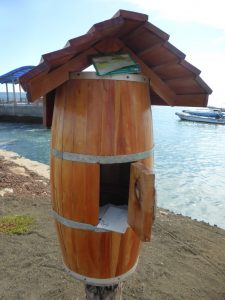 “The post office ‘barrel’ has existed since the 1800’s and it is where ships used to leave mail they wanted delivered.  If you stopped at the beach where Bahia Post Office was located on your way to England with your ship, and there was mail that someone wanted delivered to England, you took it with you to deliver in England yourself.  The idea still exists and there are many postcards in the barrel today with addresses for hopeful delivery from other travellers.  It is a very cool concept.  I am just very curious to know how long it would take a letter to get hand delivered to Big Beaver, Saskatchewan.

Before I left I put a postcard in the barrel letterbox in the harbour and wrote the dad’s address of the farm/ranch in Big Beaver on it.  How amazing it would be if it actually arrives and is hand delivered…  I took a postcard for (Sherwood Park, a suburb of) Edmonton that I will try to figure out how to get there because I thought it would help with karma.” 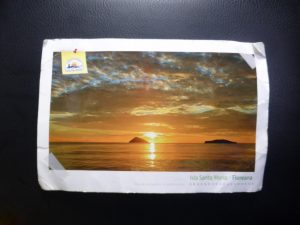 This is the postcard to be hand delivered.

Well, Karlee and I had to head to Sherwood Park today to pick up a part for her mother’s car.  I was pumped when I found out that was where we would be going.  We were in the parking lot of a Supermarket in Fort Saskatchewan when her mother called her to tell us we needed to go to Sherwood Park for her.  I told Karlee about the postcard I had in my backpack and showed it to her.  She said, “We are going to deliver that first!”  She was as excited as I was.  The address on the postcard came up immediately on her phone GPS.  We set off in search of the house. 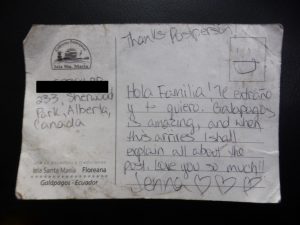 The back and the address of deliverance.

The Global Positioning System lead us to a very wealthy area where homes of rockstars who are not really rockstars are located.  We were hoping the addressee would be home and I could hand deliver the postcard to bewildered faces rather than just leaving it in the mailbox.  It took a lot of work to pinpoint the exact house and I had to ask directions once.  An older man guided us in the direction of the address when we struck out on our initial drive by.  When we came around again, the number of one of the houses could not be read but there was a woman standing in the open front doors, manicuring parts of the interior.  As I walked up with the postcard in my hand I told the lady what house number I was looking for.  She said I was at the right place.  I asked her if she knew a girl named Jenna.  She said, “Jenna is my daughter.”  I said, “Hello, my name is Stephen.  Most people call me Beaver.  I was just in the Galapagos Islands and I am hand delivering this postcard to you from there.”  I showed her the picture of the barrel letterbox. Her response was, “Oh my god…  Wow…”  It worked.  And it worked.

She told me her name was Michelle.  We shook hands.  She was kind of dumbfounded by what had just happened and ran upstairs to find a picture of Jenna to show me an image of her daughter.  When she could not find one she came down the stairs and went through a filing cabinet to find a graduation picture of Jenna.  She told me Jenna had been in the Galapagos in June, around the time I was actually there myself, which means that it was pretty fast mail considering it was hand-delivered.  I asked her if I could have a picture of her with the postcard to which she consented.  It was really cool.  She did not really know what else to say to me and a phone text arrived to which she guessed was probably Jenna.  I handed her a couple of Beaver stickers with my email address written on them and headed for the car where Karlee was waiting.

A very shocked recipient with her daughters picture.

That is one of the coolest experiences I have had in a long time.

Now, if my karma trade-off works and a postcard actually shows up hand-delivered to my father in Big Beaver, Saskatchewan from the Galapagos Islands in Ecuador, my life will have reached a strange peak… 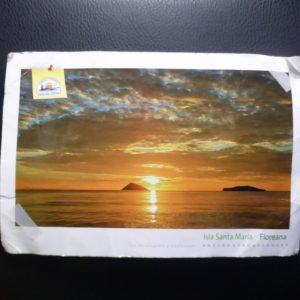 This is the postcard to be hand delivered.

The back and the address of deliverance.

“A “Bride-Prize” in Swaziland is 18 cows that you must give to the father of the girl you want to marry.  If she is a princess, the price is 35 cows.  I thought that the price of a princess compared to a regular girl was quite a bargain, but Denzel told me that the king has a lot of daughters, so it is not really a big deal.  (The current king has 15 wives and his father had 70 that gave him 210 children). Each cow has an approximate value to $400.  If the woman you are going to marry has one child, that will save you two cows and the new bride-prize will be 16 cows.  If she has two children, the price is 14 cow, and so on… I suggested that such a savings was undervalued.  To marry a woman with children and to spend a lifetime taking care of them for the equivalent of two cows would probably would not cover that spread.  I said that I wanted a better deal.  Denzel told me that I might be able to negotiate.  Then, I got an even better idea.  I decided that if I was to marry a woman with a child in Swaziland, I would only marry a woman who had a daughter, supposing that it would be a solid investment of 18 cows into my future.  Finding a Swazi girl with a daughter or two…that is a solid business investment.  It is like buying stocks sure to net profit! I asked Anna if she was a virgin.  She said she was not.  I asked her if she thought her father would let her go with me if I showed up at her house and offered him 15 cows.  She said she was not going for anything less than 18 cows.  I told her that she was used goods and that used goods never go for the same rate as something brand new. She did not think I was very funny.  I went to bed not long after that…”
— Swaziland Bride-Prize
[View All]